Practitioners have recently organized and hosted the "Uncompromising Courage" Painting Exhibition in many Korean cities. The exhibition was held in the following cities: Daejeon (September 20 - 27); Siheung City (September 30 - October 3); Seoul (October 4 - 7); Dae-Gu (October 15 - 24); Gwangju (October 21 - 26); Anyang (October 30 - November 5) and in Busan (November 1 to 5). The truth about Falun Gong has spread throughout the whole peninsula along with the painting exhibition.

However, with the righteous thoughts and righteous actions of all Korean practitioners, all the cities holding our art exhibition quickly found suitable exhibition halls. The practitioners experienced the miraculous power of Dafa.

For example, the first exhibition was held in Daejeon. The practitioners found the best art gallery with convenient transportation, and prepared for the exhibition, day and night, for several days. Through their hard work, the exhibition was launched on time. The manager of the art gallery said he was very impressed that practitioners could complete the preparations in such short a time.

In Dae-Gu, one university had reserved the Pingsong Youth Training Hall for their graduate arts show. But the university cancelled the reservation because the conditions inside the exhibition hall were not acceptable to them. So the practitioners negotiated with the Pingsong Hall and prepared to paint the walls themselves. To our surprise, the administrators of the Hall decided to be responsible for the renovation. In the end, all the preparations were completed just 6 hours ahead of the art exhibition. 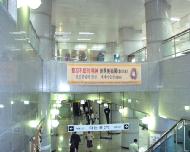 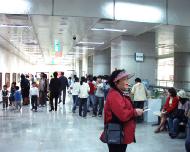 The Gwangju Biennale 2004, a major international arts festival, will last until the end of the year. All the exhibition galleries and halls in the city were booked. But the flourishing Subway Station Exhibition Hall gave Falun Gong practitioners an opportunity. Although the Festival had booked both sides of the exhibition areas, they didn't have enough art works to display. So the Festival used only one side of the hall and the other half was given to Falun Gong. This exhibition hall was right on top of the subway station, so a lot of people saw the paintings.

In Anyang and Busan, there were also cancellations of reservations, so Falun Gong practitioners successfully set up the exhibition according to the schedule. The whole procedure was like a miracle.

2. Touching Stories During the Exhibition

Many people visited the paintings exhibition and learned the truth about Falun Gong. The following are a few samples.

One middle-aged man decided to come to the exhibition immediately after receiving the invitation. In the exhibition hall, he listened to the entire introduction to all of the paintings. Tears kept running down his face. After the tour, he asked many questions about Falun Gong and immediately called the local bookstore and ordered Zhuan Falun, Falun Gong, and the exercise teaching video. He learned the exercises, and on the second day he brought some friends to the exhibition to learn the exercises, and did the same on the third day... and every day until the end of the exhibition. Finally, he made an appointment with local practitioners to join their group practice.

One 80-year-old man had some difficulty with his knees and he couldn't stand for a long time. In the exhibition hall, he had to sit for a while after listening to the explanation for 4 or 5 paintings. Then he would get up and continue. Finally, he had listened to all of the introductions and he praised Falun Gong highly. He said he also wanted to practice Falun Gong.

Students from kindergarten through high school visited the exhibition in groups. Perhaps children are purer and kinder than adults, and they can understand the essentials faster. When a practitioner was giving the introduction to the paintings, the children's eyes opened wide and they listened carefully and sometimes asked questions and expressed anger at Jiang Zemin's brutal persecution of Falun Gong.

In Anyang, the exhibition hours were extended to 10 p.m. in order to be convenient for people who worked. At first, the staff of the exhibition hall was not very happy about this since they also had to work late and they had never had an exhibition run this late before. During the 7-day exhibition period, the practitioners always opened the door on time in the morning and worked until after 10 p.m. every day. The exhibition hall staff sighed and said, "We have never see anyone as diligent as you people. You are amazing!"

Through the touring art exhibition, many civic leaders learned the truth of Falun Gong and the persecution. In Seoul, the councilman of the leading party, Mr. Shin Hakyeong, Director of the Korean Cultural College and many well-known social figures attended the exhibition and gave it sincere praise. The executive of Amnesty International Korea Mr. Pu said, "I knew that the human rights situation in China is bad. But only after seeing the exhibition, have I learned just how severe the persecution [of Falun Gong] is." He then added that Amnesty Korea is concerned about a solution to the problem and would utilize many possible methods to end the persecution.

In Busan, the Vice-chancellor of Busan University, Head of Namqu City Council, and Mayor of Nonsan-Si Chungcheongnam-do visited the paintings exhibition. The exhibition had a good effect in helping these civic leaders to learn the truth. The Busan practitioners also brought a laptop computer to the exhibition hall and played video programs about Dafa to further clarify the truth. The visitors responded with positive feedback.

The exhibition in Anyang was the first exhibition of these paintings in a small to medium-sized city. The Mayor came to the exhibition with a flower basket and said that he had heard a great deal about the paintings exhibition.

During the exhibition tour, nationwide media outlets gave the exhibition a great deal of attention. In each city, the Korea Daily, Chong-Do Daily, United News, Gwangju Daily, Pan-South Daily, Kim-in Daily, as well as the Busan TV Station and the Anyang TV Station reported on the exhibition or interviewed the practitioners. They reported on how the Falun Gong artists were not fearful of the Jiang faction's persecution and used their paintings to bravely stand against the persecution and call for an end to the suppression. Many reporters were supportive and showed their concern. The media reports played an active role in the truth-clarification process on the Korean Peninsula.

This is just a beginning. The paintings exhibition will continue in other places in Korea. This month, the exhibition will be in Incheon. Next year, we plan to hold an exhibition in the Korean Congress. Korean practitioners will use this precious opportunity to clarify the truth to the Korean people and try their best to end the persecution as soon as possible.