San Francisco: Practitioners Gather in front of the Chinese Consulate and Demand That Jiang, Luo, Liu and Zhou Be Brought to Justice (Photos)

(Clearwisdom.net) Minghui correspondent Wang Ying reports from San Francisco - On the noon of October 24, 2004, Falun Gong practitioners from San Francisco area gathered in front of the Chinese Consulate to protest against Chinese authorities' persecution of Falun Gong. Practitioners demanded that Jiang Zemin, Luo Gan, Liu Jing and Zhou Yongkang, the chief perpetrators of the persecution, be brought to justice. 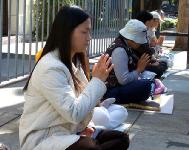 Mr. Peng who goes to the Chinese Consulate everyday to attend the appeal said, "Today, we come to the Chinese Consulate to demand that Jiang Zemin be brought to justice. Jiang's both hands are covered with blood stains. It is the heaven's law that the evil will receive its due retribution. Luo Gan, Liu Jiang and Zhou Yongkang have assisted the tyrant to do evil. They planed, directed and supervised government officials of different levels to persecute Falun Gong. Therefore, we urge to bring them to justice." Since July 20, 1999, Jiang sigle-handedly launched the suppression of Falun Gong. We have continued to come to the Chinese Consulate every day for so many years to demonstrate to people that Falun Gong is great and expose Jiang faction's cruel persecution of Falun Gong by means of displaying photos and posters."

Mr. Peng said that over the past five years, 100 million Falun Gong practitioners suffered from the persecution. Their relatives and friends were also implicated. This was not an issue of only 100 million people. So many people have been implicated and persecuted. At least 1000 practitioners died from the persecution, several thousands of people were forcibly sent to psychiatric hospitals and were injected with drugs that damage the nerve-system. More than 100,000 practitioners have been unlawfully imprisoned in forced labor camps. Countless families are mentally suppressed and financially extorted. Therefore, "We demand that Jiang's faction and those who directly participate in the persecution be brought to justice," said Mr. Peng.

Ms. Liu from San Francisco said that during the more than five years of persecution of Falun Gong, many people who cultivate themselves in accordance with Truthfulness-Compassion-Tolerance were tortured to death. In addition, Jiang's group also deceived numerous Chinese people through its slandering propaganda. Chief perpetrator Jiang should be held accountable for what he has committed.

Ms. Liu said, "Falun Gong practitioners follow the principles of Truthfulness-Compassion-Tolerance and become better persons. Their moral standards were also improved. This would be extremely beneficial to the society and there is no harm at all."

Mr. Ma who works at a company in the Bay area expressed, "Because we keep exposing Jiang group's persecution of Falun Gong practitioners, the suppression has already met its dead end. It won't last long." He said, "Today, I come to support to bring Jiang, Luo, Zhou and Liu to justice. We must have those criminals be held accountable for crimes they committed in the oppression of Falun Gong. The message that we try to convey by requesting to bring Jiang, Luo, Zhou and Liu to justice is: evildoers must be held accountable for their evildoings. Any pretext such as 'carrying out the leaders' instructions' can not be used as excuses to absolve them of responsibility."

In the gathering, Falun Gong practitioners pointed out that out of his personal jealousy, the chief perpetrator Jiang has adopted all kinds of cruel torture methods and abject means throughout history and from various countries to systematically and inhumanly persecute Falun Gong practitioners, in an attempt to force them to give up their belief in Truthfulness-Compassion-Tolerance. Through threats and bribes, he coerced government officials and police officers to betray their conscience and become his accomplices. Use both carrot and stick as well as implication policy, he coerced the entire Chinese society to betray their conscience and assist the crimes. He even trades China's territory and huge market for international society's silence on the genocide that is taking place in China. Jiang Zemin utilized that state propaganda machine to fabricate all kinds of lies to incite hatred among Chinese people inside and outside China, which made people knowingly or unknowingly commit crimes.

On June 10, 1999, he established the "610 Office" and granted it power overriding the Chinese Constitution and other laws. It is a Gestapo-like system that covers all levels from the central government to villages and is specifically in charge of implementing the state-terrorism policy to persecute Falun Gong.

Liu Jing is the head of "610 Office" which was established specifically to persecute Falun Gong. He is in charge of attacking and preventing Falun Gong affairs. Over the past five years, the 610 Office constantly conveyed Jiang's various secret orders to suppress Falun Gong. Hundreds of witness's records indicated that the secret orders included: "defame their reputation, bankrupt them financially and destroy them physically;" if practitioners are "beaten to death it is nothing and shall be counted as suicide;" "cremate their body directly without identifying the person." These orders that they are afraid of being exposed have allowed local police officers wantonly torture and even murder Falun Gong practitioners in China.

Zhou Yongkang was the secretary of the Sichuan Province Party Committee and is currently the minister of Public Security (as the police are called in China). During his tenure in Sichuan, he personally directed the persecution of Falun Gong and implemented the implication policy, "If parents practice Falun Gong, lay the children off from their jobs; if children practice, fire their parents, stop paying their pensions and cut off their financial resources." According statistics from July 1999 to December 2003, 79 Falun Gong practitioners in Sichuan Province had died from the persecution. During the violent brainwashing, some were tortured to death, some were beaten to death right on the spot.

Terri Marsh, chief attorney in the lawsuit against Jiang Zemin filed in a Chicago court said that she is working very hard to urge the international judiciary to establish an organization similar to Nuremberg international military tribunal to try Jiang, Luo and their accomplices.