Shuangyang Township in the Hanting District of Weifang City, Shandong Province, is one of the most notorious areas in the region for the persecution of Falun Gong practitioners. Authorities here ordered police officers to commit heinous crimes. For the past few years, they have arrested and jailed practitioners numerous times and fined them large sums of money. Practitioners' families are also not immune from ill-treatment. Among the approximately 260 Falun Gong practitioners in the entire township, 218 were unlawfully fined, in amounts ranging from 1,000 yuan (1) to 7,000 yuan. Numerous practitioners were subjected to brutal beatings and long-term imprisonment. Two practitioners were placed in mental hospitals for persecution. Practitioner Ms. Chen Xiangfen was made to endure especially inhuman tortures.

The prime perpetrators involved in the torture were:

Practitioners who were persecuted include:

The following photographs are reenactments by Falun Gong practitioners of the tortures endured by Ms. Chen Xiangfen:

On February 22, 2000, 20 to 30 people from the Shuangyang Township ruling Party Committee, police station, and armed police section kicked Chen Xiangfen and burned her with cigarettes. 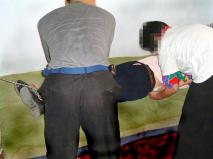 February 5, 2000, five to six nurses from Shuangyang Hospital tied Chen Xiangfen to a bed and injected her with harmful drugs. 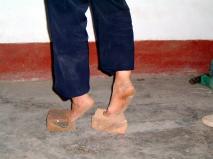 December 29, 2000, officials from Shuangyang Township Communist Party Committee handcuffed Chen Xiangfen to a steel frame so that only her toes touched the ground.

(1) Yuan is the currency in China; 500 yuan is equal to the average monthly income for an urban worker in China.