Xingbu Town in the Weicheng District of Weifang City, Shandong Province is one of the seven main "Reform Sites" where the local police torture practitioners to try and make them renounce Falun Gong. Since October 2000, lawless people in Xingbu Town have been hired to persecute practitioners. Some of the methods they have used include: shocking practitioners with electric batons and stun guns, flogging them with hard rubber hoses, kicking them with leather boots, intimidating them, threatening them, deceiving them with false rumors, starving them or giving them only meager rations, administering physical punishments, extorting money from them, striping off their clothes and leaving them to freeze in cold weather, and forcing them to curse Falun Gong and the founder of Falun Gong. The following are some of the facts of the persecution taking place in the "Reform Site" in Xingbu Town:

The following are reenactments of two types of tortures inflicted on practitioners: 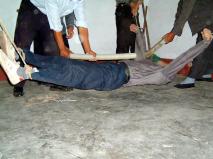 On December 21, 2000, the police from Changle Police Station tied ropes around practitioners' hands and feet, pulled their bodies up by the ropes, and beat them.

On March 2, 2000, Xia Huaiming and eight other perpetrators shocked practitioners with electric batons, hit their faces with leather boots, and flogged them using hard rubber hoses.

A partial list of Falun Gong practitioners that have suffered the most severe persecution in the "Reform Site" in Xingbu Town, Weicheng District