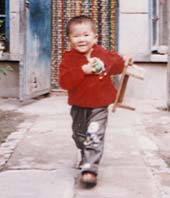 (Clearwisdom.net) Liu Tianchun was born on Spring Festival Eve, January 6, 2000. He's not yet five years old. Liu Tianchun's father was Liu Haibo, a doctor at Lvyuan District Hospital in Changchun City, Jilin Province. Many people comment that he was a good man, kindhearted and a hard worker.?/P> 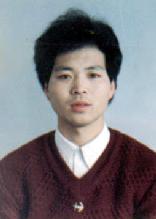 Liu Tianchun's mother is Hou Yanjie, a very nice woman who gets along well with her mother-in-law. 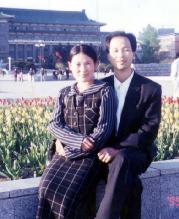 Both of Tianchun's parents were Falun Dafa practitioners. On January 4, 2000, two days before Tianchun was born, police took Tianchun's father into custody because he refused to give up practicing Falun Dafa. Tianchun did not see his father until he was 20 months old.

In March 2002, the police abducted both of his parents. They were tortured during their interrogation just because they practiced Falun Dafa to achieve better health and to become good and truthful people. That same night officers from the Kuancheng District Police Department in Changchun City beat his father to death. The police were afraid that people would find out what they had done, so they cremated his body without notifying his family. It was a year before anyone in the family found out what happened. Tianchun's grandparents are over 70. They still don't know that their dear son was killed and are still waiting for him to come home.

Tianchun's mother was illegally sentenced to three years of forced labor. Tianchun was sent to his mother's parents, both of whom were over 60. They don't have much income but are able to maintain a basic living. Tianchun is very smart and understands a great deal. Whenever he saw prisoners in handcuffs and shackles on TV, he would say, "My mother is like that, too, but my parents are both good people."

A few days before his mother was released, he was very happy and said, "I have forgotten what my mommy looks like." Afterwards he would ask again, "Mommy has come back, now what about dad?" His words moved people to tears, but who could bear to tell him?

Now Tianchun's mother has a difficult time living with Tianchun in her parents' home. His mother was brainwashed in the labor camp and, under the pressure of cruel torture, gave up practicing Falun Dafa. After she came back home, she was very weak, and her face was disfigured. She also has a heart problem.

Let us end this disaster soon, and not let the tragedy of Tianchun's family happen again.

“I Am a Disciple of Master Li Hongzhi (Part 2)”

“Being Grateful for Master's Compassion and Protection: My Story of Going to Beijing to Appeal for Dafa in 2000”