(Clearwisdom.net) On October 29, 2004, Canadian Falun Gong practitioners conveyed a clear message to the Chinese authorities overseas: "Bring Jiang Zemin to Justice," "Bring Luo Gan to Justice," "Bring Liu Jing to Justice" and "Bring Zhou Yongkang to Justice." In conjunction with activities held in North America, Europe and Asia and other areas, we call for the Chinese authorities to stop the persecution and bring the chief perpetrators to justice. 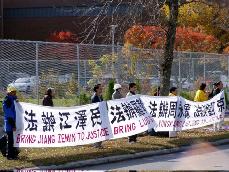 Bringing the chief perpetrators to justice is the only way

According to a report released by the World Organization to Investigate the Persecution of Falun Gong, Jiang Zemin is the initiator and chief director of the five-year persecution that has impacted several hundred million people. On June 10, 1999, because of Jiang Zemin's personal will and abuse of power, the "610 Office" was established specifically to persecute Falun Gong, overriding the Chinese Constitution and the law, with power over each level of administration in the Party and all other political and judiciary systems. After July 20, 1999, Jiang Zemin ordered the "610 Office" to carry out an annihilation policy against Falun Gong practitioners in China, including the following directives:

According to incomplete statistics, as of today, 1,089 Falun Gong practitioners have been tortured to death in more than 30 provinces, autonomous regions and municipalities.

Luo Gan is a member of the leadership team of the central "610 Office." After July 20, 1999, Luo Gan was the main executor to carry out Jiang's genocidal policies against Falun Gong. From 1999 to 2002, he directly participated in making policies to escalate the persecution of Falun Gong.

Liu Jing is the head of the "610 Office." Liu Jing and Luo Gan often went together to the notorious Masanjia Forced Labor Camp to personally inspect the progress of the brainwashing efforts against Falun Gong practitioners. They also ordered that the cruel methods that Masanjia employed to torture Falun Gong practitioners become a model for other labor camps and brainwashing centers, not only in Liaoning Province where Masanjia is located, but around the country. Liu Jing personally helped plot and implement the self-immolation incident in Tiananmen Square, an unbelievably twisted propaganda stunt contrived and staged to demonize Falun Gong in the minds of the public. Liu Jing is also responsible for the creation of mass quantities of propaganda designed to incite hatred against Falun Gong.

During his tenure in Sichuan as the Provincial Party Committee Secretary and Minister of Public Security, Zhou Yongkang's hands are stained with the blood of Falun Gong practitioners. He has made Sichuan one of the provinces where Falun Gong is persecuted the most severely.

Spokesperson for Falun Gong Ms. Zhou Limin said that the injustice will be redressed, and Falun Gong's name will be cleared sooner or later. However, the five-year persecution of innocent Falun Gong practitioners will not ended by only punishing some scapegoats. The true perpetrators need to be brought to justice.

According to Falun Gong practitioner Ms. Zhou Limin, Canadian practitioners have taken a series of measures to bring the evildoers to justice. The Royal Canadian Mounted Police has a list of 45 Chinese officials at various levels, "610 Office" personnel, and officers in forced labor camps, including the four chief perpetrators to be monitored. Once these people enter Canada, the Canadian police can immediately open an investigation. Furthermore, victim of torture Professor Zhang Kunlun filed a lawsuit against the chief perpetrators, including Jiang Zemin, in Canada, and more than 10,000 Canadians have signed their names to support the lawsuit.

Canadian Minister of Justice and Attorney General of Canada Mr. Irwin Cotler stated in a letter he sent to the Canadian Falun Dafa Association last month that when a crime occurs, so long as either the perpetrator or the victim is a Canadian citizen, according to the "Crimes Against Humanity and War Crimes Act," Canada can prosecute those who have committed crimes of genocide, war crimes and crimes against humanity outside Canada. Moreover, regardless of whether the perpetrator or victim is Canadian or not when the crime took place, if the perpetrator appears in Canada after the crime, Canada has the right to try the perpetrator.

The Minister of Justice emphasized that the Canadian government is explicit in this policy. Canada is not and will not be a harbor for those perpetrators who have committed war crimes, crimes against humanity and other crimes that should be punished severely, no matter when and where they committed the crimes.

Bringing the chief perpetrators to justice: "The largest action taken regarding human rights after WWII"

On October 26, 2004, New Zealand Falun Gong practitioners filed a lawsuit against former Chinese President Jiang Zemin in the Auckland High Court. By now, Falun Gong practitioners have filed lawsuits against Jiang, as an individual, in ten countries including the USA, Canada, Korea, Greece, Australia, Spain, Belgium, Germany and other countries, on charges of genocide, torture and crimes against humanity. Counting lawsuits where he is named with other Chinese officials, Jiang Zemin has been served with lawsuits in 21 countries. Twenty-seven lawyers around the world have participated in the legal action against Chinese officials who are responsible for the persecution of Falun Gong. The largest TV station in New Zealand reported that these actions can be called the "largest action taken regarding human rights after WWII."

President of the Canadian Falun Dafa Association Li Xun said in an interview that the Nuremberg Trials after WWII left a good precedent for history. He said, "Any individual, no matter how high his position is, even if he is a head of state, will be held accountable for his crimes. Furthermore, unprecedented crimes will be tried by unprecedented legal means. For example, crime against humanity was first used in the Nuremberg Trails. Twelve war criminals were sentenced to death by hanging at the Nuremberg Trials. The persecution that Jiang's faction launched has lasted for five years. It is not only the persecution of Falun Gong practitioners, but also the persecution of the human spirit, morality and conscience. Jiang, Luo, Liu and Zhou have committed extremely heinous crimes, and their hands are stained with the blood of innocents. Though the manifestation of the persecution was not war, the harm it has done is extensive and unprecedented. Therefore, the punishment against them should also be unprecedented."

Li Xun said that it is a historic necessity to try the perpetrators who have committed huge crimes. Specifically, these perpetrators should be put on trial through the current International Criminal Court. A special court can also be set up if needed. Once Falun Gong's name is cleared in China, the international community will supervise the trials against these evildoers in China. We will join the international judicial organization to prepare for the trials against these human rights violators.

Li Xun concluded by quoting what chief U.S. prosecutor Robert Jackson said in his opening speech at the Nuremberg Trials, "The wrongs which we seek to condemn and punish have been so calculated, so malignant, and so devastating, that civilization cannot tolerate their being ignored, because it cannot survive their being repeated."

“US Congressman David Price: The Shooting of Falun Gong Practitioner in South Africa Suggests a Disturbing Conspiratorial Pattern of Harassment and Intimidation Perpetrated by the Jiang Regime”