On July 20, 1999, Jiang Zemin launched the persecution of Falun Gong. At that time, lies and slander were everywhere. Practitioners were treated violently, their right to freedom of speech was taken away, and all their channels for appeal had been blocked, so a large number of practitioners were forced to go to Tiananmen Square to voice their opposition to the persecution.

Early in December 2000 I went to Tiananmen Square and shouted my heartfelt wishes. I was badly beaten up and then taken to the Tiananmen Square Police Station. A large number of practitioners had already been taken there. Next, they were taken to police stations around Beijing for illegal interrogation and preparation for repatriation to their own hometowns for further persecution.

I was taken to the Qianmen Police Station together with several other practitioners whom I had never met before. That year I was 23 years old and not married. The head of the police station, Ma Zengyou, persecuted and humiliated me with indecent behavior. Following are some of the facts of the brutal persecution that I suffered at the hands of this policeman. (I drew all of the illustrations.)

Four or five policemen from the Qianmen Police Station pushed me to the floor and took photos of me against my will. Later, a plainclothes policeman took me to a room on the second floor. He was not very tall but a bit overweight. From fellow practitioners' descriptions in their articles exposing the persecution, I learned that this was Ma Zengyou. He wanted to file a criminal charges against me, so he told me to put my fingerprints on a statement saying that I admitted guilt and he ordered me to tell him my name and address. I told Ma that my purpose for going to Tiananmen Square was to appeal to the people, so I was not guilty and had not done anything wrong. Therefore I would not tell him my name and address. Ma Zengyou searched me physically and took away several hundred yuan and my watch. He put it all into his own pockets without giving me a receipt or any other evidence that could prove he had taken these things from me. Instead he forced open my hand and fingerprinted my middle finger on the statement. After that he punched and kicked me.

Ma Zengyou slapped my face with his hand over and over. When his hand got swollen, he used a slipper instead. My face was covered with dirt. Then he forced me to get on my knees and sat on me. He used very indecent language and grabbed my hair to slam my head against the floor. My hair was all over the floor, and I'll never know how much blood I lost. (See the following illustrations.) 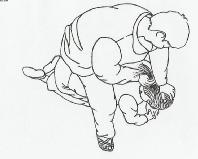 In the biting cold weather of December, Ma Zengyou dragged me to a pool and poured cup after cup of icy water down my blouse. It took several days before my own body temperature was able to dry my clothes. (See the following illustration.) 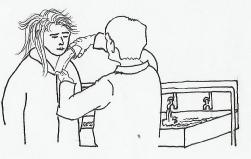 Ma Zengyou then poked his police baton all over me and even behaved like a hoodlum. He attempted to put his hand into my shirt to touch my breasts. He tightly grabbed my bra strap, and I had to struggle very hard to stop him from doing so. He only let me go when he was breathless. Another policeman then came in and took me out of the room. Not long afterwards, Ma Zengyou, came back and took me into his room on the second floor once again to begin a new round of torture. As before, he first slapped my face. Then he clawed at my eyes with his fingers and said viciously, "I will dig out your eyes!" After that he grabbed both of my ears and pulled right and left as if he wanted to tear them off. He also pulled my lips in the same manner. And then he slapped my face again. When he was torturing me he often looked out the windows because he was afraid that his evil deeds might be discovered and exposed. When I found this out I shouted for help. He was scared and stuffed a towel into my mouth. When I managed to spit the towel out, Ma stuffed his stinky foot into my mouth. (See the following illustration): 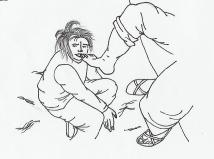 Finally he pushed me onto a sofa and bit my lips so hard that they bled. I struggled very hard to push him away. (The actual scene was very much like the following illustration.) 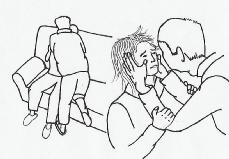 Ma Zengyou only stopped when he was totally exhausted at about half past two in the morning. He attempted to drag me into the bed in his office to rape me. I struggled with all my strength. At first I was very scared, but then I thought, "I am a Falun Dafa practitioner and I will be OK." Right about then he gave up his attempt. The methods he used to torture Falun Dafa practitioners are simply too numerous to remember. Ma Zengyou once threatened, "I will beat you to death. Your death will be counted as a suicide, and no one will know if I stuff you into a gunny-sack and bury you somewhere." From an article published on Clearwisdom.net I learned that this very policeman acted even more horribly when he tortured other women practitioners.

What I have mentioned above is only the tip of the iceberg. A great number of Falun Gong practitioners have suffered persecution to varying degrees at police stations in and around Beijing. Jiang Zemin cooked up the evil policy of brutally persecuting Falun Gong, giving orders to "destroy them physically, bankrupt them financially and defame their reputation." As a matter of fact, this policy incited the perpetrators to commit even more evil deeds.

I call on all kind-hearted people to pay close attention to the brutal persecution of Falun Gong practitioners in China and to help end this peril, which is of vital importance to the moral standards and fate of the Chinese nation.