Falun Dafa practitioner, Mr. Tan Chengqiang from Hongcheng Village, Handian Town, Shuangcheng City, Heilongjiang Province died from being persecuted and tortured. His oldest son, Tan Enlong, his second son, Tan Enfei, daughter, Tan Yuxiu, and wife, Guo Jinglan, must now depend on each other. They support themselves by farming a small 1.65 acre plot of land. 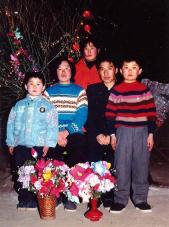 The five members of Mr. Tan Chengqiang's family:
Tan Enlong, 16, attends Zhaolin High School, a model high school in Shuangcheng City.
Tan Enfei, 13, is a student at the Hongcheng Elementary School.
Tan Yuxiu, 19, quit school due to the poor economic situation of her family, and now stays home to help her mother.
Ms. Guo Jinglan, 39, is a farmer.

All five members of Mr. Tan Chengqiang's family happily started practicing Falun Dafa in 1995. In August 1999, Mr. Tan Chengqiang was detained for fifteen days because he went to Beijing to appeal on behalf of Falun Dafa. In October that same year, he was sentenced to two years at the Yimianpo Forced Labor Camp for going to Beijing to appeal again. On May 18, 2003, he was reported by the village head, Wang Hongsheng, and villager Liu Hongguo, while he was clarifying the truth of Falun Dafa to the local people. At 4:00 a.m. on May 21, he was arrested and taken to the Second Detention Center. During the detention, Mr. Tan Chengqiang went on a hunger strike to protest the persecution. The police in the detention center forcibly fed him several times, twice a day. One day, a drunken doctor came to force feed Mr. Tan Chengqiang, and the doctor improperly inserted the feeding tube, putting it into Mr. Tan's lung. Instantly, Mr. Tan Chengqiang started to spit up massive amounts of blood. A person grabbed a basin and collected half of a basin of blood. Mr. Tan immediately lost consciousness. The doctor said, "He is pretending." The doctor asked other people to pour cold water over Mr. Tan to wake him up. At that time, Mr. Tan was struggling for his life. Even in that condition, the doctor forcibly fed him an additional seven or eight times. It was only when he was on his Death Bed">Death Bed that they sent him to the hospital. He was diagnosed with water accumulation and deterioration of his lungs. This was completely the responsibility of the police. The hospital could not treat Mr. Tan's life-threatening condition. Fearing the responsibility for his death, on June 20, 2003, the staff at the Shuangcheng Detention Center ordered Mr. Tan's family to take him home. When Mr. Tan was taken home, he was already as thin as a stick and his cheeks were dark purple. In the month he stayed home, he coughed up blood all day long for several days. Finally, he died on the evening of July 19, 2003. He left behind his wife and three children.

“Who Gave the Township Municipalities the Power to Arrest, Detain, and Interrogate?”