(Clearwisdom.net) Orphaned two-year-old Wang Tianxing is being cared for by his aunt Feng Xiaomei. Due to the long-term persecution of his parents he has no "legal status" and no registered permanent address. He is presently staying with his aunt at:

His father, Wang Xiaofeng, was forced to leave home to avoid persecution in June 2001. 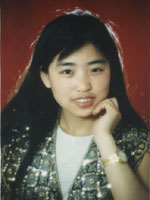 Feng Xiaomin, mother of Wang Tianxing died on June 1, 2004 due to the persecution

Feng Xiaomin was born in 1970. She was 34 years old when she died as a result of persecution. She used to be a factory worker in the sixth cotton factory of Shijiazhuang city, and lived with her sister Feng Xiaomei and her husband. In 1996 she began practicing Falun Gong. As she gradually gained a deeper understanding of the true meaning of life, she disciplined herself strictly to behave as a good person. She eventually married practitioner Wang Xiaofeng, and they shared a happy and harmonious life.

In the early morning of July 20, 1999, police abducted Feng Xiaomin's sister, Feng Xiaomei, and her husband, leaving their 10-year old son Wang Boru alone. Out of concern for this broken family, Feng Xiaomin took Boru everywhere to look for his parents. She went to the appeals office at the city and provincial level, but discovered that only the national appeals office had the power to resolve the problem. So she took Boru to Beijing. There were police officers besieging and blocking the entire way. Not daring to take the main road, they walked through corn fields. Their feet blistered; their clothes became dirty; they were hungry, tired and scared. When they finally arrived in Beijing, plainclothes police were everywhere to arrest practitioners, and Boru was lost. Feng Xiaomin followed many Falun Dafa practitioners to Tiananmen Square, where thousands of practitioners were sitting on the ground, reciting Teacher's articles "Lunyu" and "Genuine Cultivation". Fully armed policemen surrounded them then suddenly started dragging practitioners into waiting police vehicles. Hand in hand, practitioners peacefully resisted. When the police started to beat them, the practitioners recited in unison "Do not hit back, do not curse back". The scene was solemn and stirring. Some police were touched and stopped, but Feng Xiaomin was maliciously attacked by an old policeman with a baton, thrown into a big bus, and taken back to her hometown of Shijiazhuang. After that, the police frequently tried to make her surrender her Dafa books. The Street Residential Committee also tried to force her to write a guarantee to give up cultivation and monitored her regularly. Her concerned friends and relatives persuaded her to look after Boru . Feng Xiaomin got through this pressure with steadfast willpower. Her sister Feng Xiaomei and her husband were finally released after two months of interrogation and detention, but they were always worried with people monitoring them from the street corner and tracking them when they went out.

Around December 2000, Xiaomin's brother-in-law was abducted once again, and her sister did not dare to go home. Xiaomin again became responsible for Boru. She sent him to school and picked him up each day, while she continued to search for the missing couple. She was worried and frightened. One month later, her sister was returned by police after being tortured nearly to death. Everyone thought she would die. Xiaomin took care of her sister carefully and established firm righteous thoughts about the situation. At the same time, she studied law, called and wrote to the police department, reported the criminal acts of the corrupt officers, warned them that they would be responsible if her sister died, and demanded the immediate release of her brother-in-law. Under her care, Xiaomei recovered in one week, and the police did not come to arrest her again. Feng Xiaomin's righteous thoughts and righteous action in this severe environment had shocked the evil, and enabled her sister to stay home. (at that time many practitioners were forced to leave their homes to avoid persecution).

In May 2001, Feng Xiaomin made an appointment with other practitioners to climb the mountain and post a banner declaring "Falun Dafa is good". They were arrested by policemen from the Donghua Road Police Station, and were missing for 40 days. During that time, policemen Shi and Fang Zhiyong extorted "evidence" through torture, causing Xiaomin to go into shock several times. Shi instigated Fang Zhiyong to remove the indication of "life in danger" from the medical records, and sent Xiaomin to Shijiazhuang No. 1 Detention Center. Policemen instigated criminals to strike her face dozens of times, causing her to become deformed. She nearly fainted, but firmly refused to compromise, and went on hunger strike, refusing both food and water for over 20 days. Her body was extremely weak and her life was in danger. Although neither the detention center nor the labor camp would take her, Donghua Road Police Station still refused to release her, and wanted to extort 5000 Yuan. Under the firm resistance of the two sisters, Feng Xiaomin was finally released, but was very weak and frequently suffered from fever. At that time, many practitioners who had been previously released were sent to brainwashing class or labor camp.

In order to avoid this persecution, Xiaomin became homeless with her husband. To protect her family members, she seldom made contact with them. With strict self discipline, she quickly regained her health. She did very well in studying the Fa, cultivating her heart, practicing the exercises, clarifying the truth, disclosing the criminal persecution and sending righteous thoughts. In September 2002, she gave the birth to Wang Tianxing and life became more difficult.

During their period of homelessness, Xiaomin and her family continued to be harassed.. A "610" policeman conducted a two month investigation on them, then the "610" office directed the Yuhua Police Station and Yuqiang Police Station to search everywhere for them, even harassing acquaintances from their hometown, creating a very difficult environment for the couple. Police were arresting homeless practitioners everywhere. It was reported that the head of Yuhua Police Station, Li Jun, even threatened Xiaomei in order to get information on the couple's whereabouts, so they did not dare ask family members to look after the baby. They did their best to care for the helpless child while always on the move to avoid illegal arrest. With the eruption of SARS last year, identification was required everywhere, but they did not have any. Eventually they were forced to separate, and Xiaomin took on the hardship of caring for the infant all alone. Under such pressure, her mind and body suffered to the point where she could no longer look after the baby and had to leave him with her sister. In May 2004, a kind person brought Xiaomin to her sister's home, but she had already lost consciousness. She was sent to the hospital and passed away five days later. She had been diagnosed with encephalitis, but the yellow brain fluid indicated something else. The doctor suspected that she had been struck in the head, and her family members also suspected that she had been beaten by police. When her family saw her she could not recognize them, and took them as police, crying out not to torture her. These details are under investigation.

Wang Tianxing's father Wang Xiaofeng is over 30 years old. He graduated from Faculty of Industrial Foreign Trade, Industrial and Commerce Administration College, Chongqing University. He attended Teacher's class in Guangzhou in December 1994. He was part of the marketing staff for the Hebei Province Glucose Factory until he was re-assigned to an affiliated company, Hebei Shengxuekanghua Medicine Limited Company. He was recognized by the leader for his hard, honest work ethics, and was promoted to Chief of Marketing Section. He was responsible for negotiating with customers and leaders, and got along well with his colleagues. After July 20, 1999, when Jiang regime forced the whole society to participate in persecuting Falun Gong, police frequently went to his work unit to make trouble for him. His supervisors were frightened by this interference. In order to lessen the pressure on the unit, Wang Xiaofeng quit his job and searched for another. The leaders of the work unit issued him one month's salary to make up for his loss, and wanted to help him financially to set up his own company, but Xiaofeng refused the offer.

Wang Xiaofeng used to be hot tempered. In his youth, he was famous for fighting with others in his hometown. He played practical jokes on others, and his family members, classmates and acquaintances avoided him. Practicing Falun Dafa made him become broadminded and tolerant. He began to study and work hard, and quickly became a pleasant young man. Later, wherever he worked, leaders and colleagues all gave him a high evaluation. When Jiang regime escalated the persecution, they adopted means of tracking, monitoring, checking ID, and threatening practitioners. This forced him to move again and again, frequently changing his job. His wife and baby had no choice but to endure their difficult, homeless state. When he heard his wife's life was in danger, he hurried to the hospital, but Xiaomin had already lost consciousness. In tears, Wang Xiaofeng parted forever with his wife and was forced to leave his infant son. Who knows when they will be reunited?

Wang Xiaofeng, Feng Xiaomei, and her husband are reportedly on the the Shijiazhuang Police Department "610" Office black list and are currently being pursued. Wang Xiaofeng is unable to provide food for his son or even see him, as his own personal safety cannot be guaranteed.

Wang Tianxing's aunt Feng Xiaomei is 30 years old. She attended the Teacher's second lecture series in Jinan. Feng Xiaomei and her husband Wang Hongbing both graduated from Changchun Post and Telecommunication College and were assigned to Hebei Telecommunication Equipment Factory. Since the start of persecution on July 20, 1999, the whole family suffered continuous misfortune. Their home were searched five times, they were both arrested three times each. Their family was broken and they became homeless. Wang Hongbin was arrested, tortured, and sent to labor camp where he suffered from lung cancer. Wang Hongbin passed away on October 9, 2003, at the age of 39. Wang Hongbin is included on the list of practitioners being tortured to death. More details of Feng Xiaomei's situation were posted previously on Minghui.org.

In June 2004, still recovering from the loss of her husband, Xiaomei was pained again by the news of her sister's death. She works hard to make enough money to get by. Life is hard, and she is tired, but still very optimistic and steadfast.

“How Did Zhang Zhuo Really Die? - Findings While Examining His Remains”