(Clearwisdom.net) At 2:00 p.m. on October 19, 2004, Taiwan Falun Dafa Association held a press conference in Kaohsiung, Taiwan to lodge a formal complaint about Xinhua News Agency slander of Falun Gong. A written protest was delivered to Xinhua Deputy Director Xu Xi'an and others, exposing their crimes of polluting the university campus and disseminating and inciting hatred. Local practitioner Ying Xiangmao is going to file a lawsuit against Deputy Director Xu Xi'an and others. The lawsuit holds the parties responsible for their verbal assaults against Mr. Ying Xiangmao on October 17 at Sun Moon Lake in Taizhong. 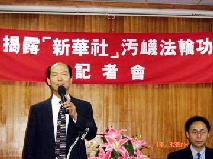 A Xinhua News Agency visiting delegation of nine people from the Mainland began their ten-day visit to Taiwan from October 11, 2004 at the invitation of Taiwan's Union Newspaper Culture Foundation. Taiwan Falun Dafa Association Secretary Mr. Hung Chi-hung pointed out that Deputy Director Xu Xi'an, once compiled a book named, "School Campuses Refuse Evil Cult" when he worked as a Standing Committee member of Beijing Municipal Party Committee, Secretary of Education and Labor Commission and Director of Beijing Education Commission. The book aims to slander and attack Falun Gong. It has been issued and promoted in schools of all levels in China to incite students' hatred of Falun Gong. At the same time, Xu Xi'an has also actively promoted various activities against Falun Gong.

Another Xinhua News Agency journalist, Li Jingchen, has been publishing articles opposing Falun Gong for a long time. He described Falun Gong practitioners as criminals who commit suicide and murder others. The contents of his articles completely deviate from facts.

Mr. Chen, spokesperson for Falun Gong Society in universities and collages expressed his regret and sorrow for young students in China who have been deceived by the media's false reports and whose minds have been instilled with lies and rumors. He called upon Chinese Youth to break through Internet blockage to learn more about facts.

Falun Gong practitioners Mr. Ying Xiangmao explained that on October 16, 2004, when he kindly explained to Xu Xi'an at Sun Moon Lake in hopes that Xinhua News Agency should be honest and fair in its reporting, Xu blatantly insulted him. Mr. Ying Xiangmao decided to ring the bell to Kaohsiung Prosecutor's Office on October 19 to accuse Xu, and would deliver a written protest to the hotel where Xinhua News Agency delegation stayed later of the day.

Mr. Yu took as an example of the crimes German Army committed during WWII of murdering the Jewish people. At the time, a magazine named Der Sturmer depicted the Jewish people as the enemy of the country, and as criminals and murderers who attempted to control and seize the power, and who used pseudoscience. Later the chief editor of the magazine Julius Streicher was charged with crimes against humanity and sentenced to death at the Nuremberg trials after the war.

During Jiang's regime's persecution of Falun Gong, Falun Gong practitioners are also labeled as "enemies, criminals and murderers who attempt to seize power, use pseudoscience and superstition" and other labels. Xu Xi'an and others in the delegation and their Xinhua News Agency have been continuously slandering and smearing Falun Gong in the past five years, and fabricating false news to incite hatred. The crimes they have committed are as severe as those of Julius Streicher. They will be held accountable for those crimes.

Finally, Falun Gong practitioners called upon Xu Xi'an and others in Xinhua News Agency to immediately stop slandering Falun Gong and stop inciting hatred. Mr. Hung expressed that filing a suit is not the purpose, the purpose is to let all people in the world learn about the slander and smear imposed upon Falun Gong, and the fact that Xinhua News Agency and other official media in China have aggravated the persecution by fabricating false news. We call upon the media to make fair and just reports, uphold justice and help end the persecution.