On September 24, 2004, an anti-torture exhibition was held in the West End railway station of Dallas, TX to call for an end of the persecution of Falun Gong in China. It was a busy area, as a bus stop and long-distance bus station were nearby. Crowds of people were coming and going, especially at lunch time. The practitioners' anti-torture exhibition caught the attention of many people. Some asked what had happened. Some read the truth-clarification posters, while others talked with practitioners to learn more.

"You are doing the right thing"

Many people heard of Falun Gong and the persecution for the first time, as practitioners explained the facts to them.

One woman told a practitioner that she adopted a Chinese child and she knew China well. She hoped we would continue our efforts. A gentleman came forward to talk to a practitioner in fluent Chinese. He said that he lived in China for six years and knew China. When the practitioner explained to him that the Jiang faction maintained the persecution with fabrications and slander, he said that they could do this because newspapers there do not report the truth.

After listening to the truth clarification, many people expressed their support to the practitioners and signed their names to support Falun Gong. A lady said, "Thank you very much for letting me know this. You know? You are doing the right thing!"

I want to learn Falun Gong

One man had heard of Falun Gong before but did not have the chance to learn. He viewed the photos showing the exercises one by one and said that he would go to a practice site to learn. A young man asked a practitioner to teach him the exercises on site.

An Asian came to talk to a practitioner. He said that his father was from China and his mother was from Thailand. He could not speak Chinese well. He had purchased the book Zhuan Falun in Thai when he visited Thailand recently. The practitioner welcomed him to the practice site to join in the group exercise.

A passer-by learns the exercises

It was hard to stay for several hours under the scorching sun. Due to limited manpower, rotation of the participants in the anti-torture exhibition was not possible. A reporter interviewed them and asked about their thoughts.

One practitioner in the exhibition said, "I feel it is a sacred thing to help more people learn the facts of the persecution of Dafa practitioners in China through our demonstration. I did not feel tired after a few hours of standing there but I was moved. I wanted to have people know the truth from the bottom of my heart."

A practitioner acting in the role of a policeman was in his 70s. Standing for several hours, when asked whether he felt tired, he said, "No problem. I can move a little compared with the practitioner representing someone being tortured." Regarding whether he liked playing the role of a Chinese policeman, he said that it was needed in order to expose the persecution and help more people learn the facts. 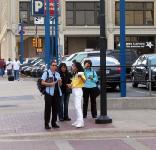 People ask for information about the torture of practitioners in China

Ms. Zhang, a contact person for the exhibition, said that this one followed the first exhibition a week ago, "We found it to be a very effective way to help people know about Falun Gong and the persecution. Practitioners who worked came to support the exhibition during their lunchtime. We will conduct similar activities in downtown Dallas in the near future."