(Clearwisdom.net) The city of Schaffhausen is located in the north-eastern area of Switzerland adjacent to Germany. During the holidays, many Germans visit the city. On Saturday October the 2nd, practitioners were granted permission by the Police Department of Schaffhausen to hold an anti-torture exhibition and demonstrate the Falun Gong exercises in the city centre.

Practitioners were able to reenact a few torture methods including hanging upside down, Tiger Bench and force-feeding. Though these were just a tip of the iceberg, the brutality revealed by these greatly shocked the onlookers. Many were heard to cry out, "Oh! No!" "How can there be such a brutal thing in the 21st century?!" Some people were in tears of sympathy for the persecuted practitioners. Quite a few of them scolded the "policemen" acted by practitioners: "You are inhuman! Stop your brutal acts right now!"

People kept coming to sign the petition and to ask for leaflets. Some asked, "How can I help you?" "You have already expressed your support by signing the petition. You can tell your friends and relatives the real situation of Falun Gong in China and let them know Falun Dafa is good. This is great support for us," Practitioners replied. 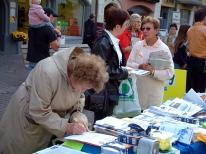 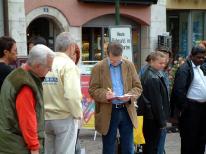 One woman from India saw the practitioners demonstrating the five sets of Falun Gong exercises to the beautiful Dafa music and she was very interested. She took the initiative to have a long chat with the practitioners. She said, "I am sixty five. Falun Gong is very good. The movements of your exercises look very beautiful. I like your exercises." Practitioners told her that Falun Gong is based on the universal principles of "Truthfulness-Compassion-Forbearance" and can help practitioners upgrade their morality so as to return to their original, true self. Learning this, she exclaimed, "Today I eventually find what I have been searching for all my life." She felt it hard to believe that Jiang Zemin launched a suppression of such a good cultivation method. Immediately she expressed her desire to practise Falun Gong, but was not sure if she could find any practice sites in India. The practitioners told her that Falun Gong is also practised in India and they could help her find the practice site there. After looking up the location of the practice site, she sighed, "Oh! This is really a predestined relationship. I believe in predestined relationship. This practice site is near my home!" Upon her departure, she made a Heshi gesture (traditional Chinese greeting gesture by pressing the hand together in front of the chest), saying, "Thank you, Master." She also left her contact information so that practitioners can keep in touch with her.

“Ireland: Laying the Foundations for a Nationwide Anti-Torture Exhibition Tour to Let More People Know about the Genocide Against Falun Gong in China (Photos)”

“Germany: Raising Awareness about the Persecution of Falun Gong in Northern Germany (Photos)”