Finally, I arrived in New York. The "Big Apple" in my geography textbook was now live in front of me. In the evening, when walking along the streets in Manhattan and passing through Times Square, the streets are illuminated. In front of the skyscrapers and glittering neon lights, tourists of different nationalities excitedly point and take pictures. Along the bustling and noisy streets, suddenly, I saw one, two, and three Falun Gong practitioners wearing yellow T-shirts, practicing the exercises or distributing leaflets. I walked towards them.

Thirteen days and nights passed in a flash. It took me more than 20 hours to fly several thousand miles, and it turned out that the experiences I read on Minghui Net became my own personal experiences. I'd like to summarize them with the following stories.

While waiting for my flight at New York's JFK International Airport, I went to buy a bottle of water. A friendly African-American girl at the stall spoke in Chinese, "Hello! How are you," whenever she saw an Asian-look person. I responded, "Miss, your Chinese pronunciation is pretty good!" She smiled and said, "I think I was probably a Chinese person in a previous life." Upon hearing that, I was surprised and said, "Yes, I agree. Maybe it is true! Wait, I have some literature for you." I took out a copy of the Falun Gong newsletter, a flyer, and a video CD and gave them to the girl. She was very happy to receive them and said, "Oh, Falun Gong! I would like to know where I could learn the practice." I told her that she could find local practitioners' contact numbers in the newsletter. She once again spoke in Chinese, "Thank you!"

One day, I went to the Chinese Consulate with fellow practitioners to send forth righteous thoughts. Streets around the Consulate were very quiet and there was very little traffic. Just as I sat down, a vehicle stopped in front of me. I heard a voice asking me in English, "Miss, are you Falun Gong practitioners?" I opened my eyes, and saw a Caucasian man dressed in blue work clothes. He held a copy of the newsletter, "Falun Gong Today," in his hand. I answered, "Yes!" He raised the newsletter and said, "I've been reading the newsletter, it is such a pity! I feel very sad and I support you." I thanked him and started chatting with him.

It turned out that he is a taxi driver. Because he worked the late shift that day, he drove by at this time. He said that he usually passed by the Chinese Consulate every morning. He always saw Falun Gong practitioners sitting here, and he felt very sympathetic towards them. I asked him where he got the newsletter. He said that that someone threw it on the ground and he picked it up. Hearing that, I was moved by his kindness. He sat down and happily talked with me. He said that he was very interested in Chinese language when he was a young child. He also excitedly spoke a few simple Chinese words. I introduced more facts about Falun Gong to him and invited him to learn the practice. He said he would. Twenty minutes passed, and he drove off after we parted ways. 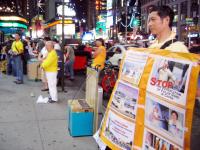 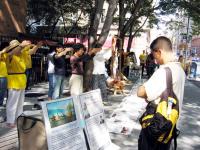 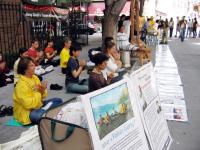 On the first evening after we arrived in New York, we distributed some Falun Gong truth-clarifying materials on the streets. We also became familiar with the environment. When practitioners from other countries talked with people and explained the facts to them, we carefully watched and learned from them. We found that the many truth-clarifying posters and photos were prepared very well, and were not only convenient but also eye-catching. Some practitioners hung the photo posters on their backs, and other practitioners practiced the exercises or distributed materials. The effect was quite good.

The next morning we went to the main railway station, according to the activity plan, but did not see other practitioners. We then started doing what we were supposed to do. The ten of us were divided into several groups. At the street intersections close to the railway station entrance, we practiced the exercises, distributed flyers, and displayed the banners. Crowds of people came and went, and many people accepted the flyers from us. Police officers on duty were friendly as they watched us. At times, groups of practitioners from Taiwan holding display boards passed by. We found out later that practitioners from Singapore were reassigned to go to other sites. No wonder we did not see fellow practitioners who arrived in New York earlier. However, we were all deeply touched by our first-day experience of actively clarifying the truth. We did not wait for or depend on others. Instead, we made good use of our time to clarify the truth.

During the first few days, because we were not very familiar with the local area, to save time our group often took taxis to go to the activity sites. The expense was similar to that of the subway, but later, a practitioner suggested that we take the subway. On the subway, a tall practitioner hung a truth-clarifying display board on his body, another practitioner held a poster in his hands, and others carried newsletters and flyers. This way we attracted many people's attention as we traveled on the subway. When people noticed the poster or the display board, a practitioner would then go over and give them a copy of truth-clarifying newsletter. Most passengers were very happy to receive the newsletters and immediately read them. Before they got off the subway, they carefully put the newsletter into their bags. Some New Yorkers took their initiative to ask, "What happened?" We would then clarify the truth to them.

As we walked the rest of the way to the activity sites, we also held the posters and distributed flyers along the street. Sometimes, we distributed all our materials before we even arrived at the sites. Seeing that the effect of clarifying the truth was so good by taking the subway, we were all very happy, and from then on we took the subway every day. Even when we took the wrong line when switching subways, it did not delay the truth-clarification no matter where we got on or got off the subway. 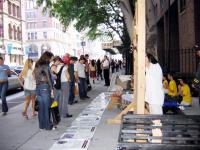 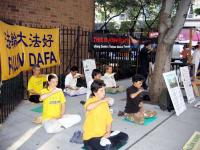 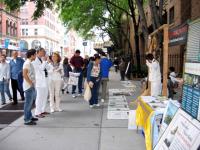 Anti-torture exhibitions expose the brutal persecution and play an important role in truth-clarification.

We had read articles on the Internet about how practitioners in many countries held anti-torture exhibitions and live re-enactments of the torture methods that exposed the persecution of Falun Gong. We had never done that in Singapore. This time, we were assigned to hold an anti-torture exhibition with practitioners from Hong Kong, Canada, and New Jersey. It was a great opportunity for us to learn from other practitioners. When we saw the props, such as the iron cage, the Tiger Bench, handcuffs, and bloody clothes, as well as the time-consuming make-up, we were all touched by the fellow practitioners' efforts.

Initially, we just helped to move stuff around, distributed materials, and took care of the booth collecting petition signatures. One day, there was a shortage of actors, and Singapore practitioners were needed to help. I thought, "We have never done this before, perhaps we would feel shy to play the role. Whom should I ask to play the role?" While thinking this way, I turned around and saw a Singapore fellow practitioner already standing there and playing the role of a police officer. After that, several Singapore practitioners played the roles of victims enduring the torture. They sat there for several hours and cooperated very well with practitioners from other countries. Many Singapore practitioners who actively took part in the re-enactment of the torture methods were usually very quiet. When actors were needed, they simply said, "Count me in."

Today, while I was in Manhattan, my English was put to use. Each day, as I handed out newsletters or took care of the petition-signing booth, I tried my best to speak to people and introduce the beauty of Falun Dafa, as well as the ongoing inhuman persecution of the practice and its practitioners in China. The peaceful practice and the brutal scene of torture formed a striking contrast, which shocked every person who passed by the display site. Other fellow practitioners also actively talked with people. They did not limit themselves to simply handing out materials. Some practitioners have very limited English vocabulary, but they consulted with other practitioners before they came to the U.S. They put all possible English words that might be used on a piece of paper and practiced pronouncing those words at home. This way, with the collective effort, more and more New Yorkers learned about the truth, and a constant flow of people came to sign our petition opposing the persecution. People used their different languages to express their good will and support.

"I feel very sad, and I hope it will turn out well."

"What can I do to help you? Do you need money?"

"You've done a great thing! I will tell this to everyone in my hometown."

"I already sent an email to a news radio station, they should report on you."

"I am a high school student. What can I do in my school to help you?"

"Such a wonderful practice! Maybe later I'll also join you."

For this trip to New York, fellow practitioners overcame different kinds of hardships to make the trip. Some practitioners who do not speak English also decided to go to New York, and they did very well in various activities. They also felt that they had learned a lot. Some practitioners unexpectedly obtained the approval from their bosses to take a long vacation. Some people changed their plans to take an earlier trip in order to participate in the Fa-rectification as soon as they could. In Manhattan, we held group practice, Fa study, and experience sharing every morning. In the cooperation with practitioners from other countries, we made up for our deficiencies by learning from others' strong points. Each day we saw practitioners from different countries or areas coming here for the same goal. It is really hard for me to express the sacred feeling. We saw practitioners from Russia, Israel, Japan, Taiwan, Hong Kong, Indonesia, the U.S., Canada, Sweden, U.K., Denmark, and so on. They looked different, but they carried the same wish. Many fellow practitioners prepared only a very simple lunch for themselves. After one-day activity, they nibbled on bread and hurried to take the subway to attend the evening group Fa-study. Travel-worn, you went and he came. We nodded to each other and waved to say "good bye." Such a group of volunteers were like a pure stream and recorded a splendid chapter in history.

“Czech Republic: Displaying the Suffering of Falun Gong Practitioners in China on the Streets of Prague (Photos)”