In January 2001, a few hundred Falun Gong practitioners, who went to Beijing to appeal for Falun Gong, were illegally detained at the Beijing Dongcheng Detention Center, Beijing. Some practitioners who refused to report their names or who went on a hunger strike to resist the persecution were tortured with "Electric Baton with Electric Needles".

The electric needles look similar to acupuncture needles. The policemen insert the needle tips into the victim's acupuncture points or other sensitive areas. The needles are connected to wires that connect to electrodes from an electric baton. The policemen adjust the electric output at will and recklessly torture the victim. At high voltages, the strong current jolts the victim high into the air above the bed causing the entire body to convulse and lose control of urine and bowel movements. Torture victims who had heart problems often died from the electricity going through their body. When criminal inmates in the detention center talk about this torture method, they cannot help trembling and shaking with fear. Practitioners who go on hunger strikes to resist persecution are repeatedly tortured with this method and suffer extremely from the pain. 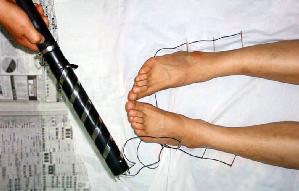 In 2000, a female practitioner (her name is unknown) was disabled after being tortured with this method. In January 2001, a male practitioner named Li from Yuhong District in Shenyang City, Liaoning Province personally experienced this torture method in Dongcheng Detention Center, Beijing. He refused to report his name and home address at that time, so the police took him to the administrative office. In the office, he saw several practitioners being forced-fed [1]. A few policemen and criminals forcibly held him down on a bed, and inserted three needles into the acupuncture points on his calves. When they started shocking him, he immediately felt all his muscles contract, his heart felt like it was being ripped out, and his body violently shook. Initially, only his legs felt numb, but later he became unconscious. The torture continued for 20 minutes.

[1] Force-feed: a brutal torture used in prison. A tube is forced down into the victim's throat and mush or fluids are poured down it. The tube closes off the airway and suffocates the victims. Because the food or fluid being forced down is not entering the body naturally, it further closes the throat as the important initial swallowing muscles are bypassed and the body cannot send it further down. Many have died while undergoing force-feeding.