(Clearwisdom.net, January 5, 2004) Japan's Minghui School was established a year ago. Over the past year, we witnessed the changes and growth of these small children from Minghui School under the guidance of the principle of Truthfulness-Compassion-Tolerance. These principles have become deeply rooted in their hearts.

When the children from our Minghui School learned that a cultivation experience sharing conference would be held in Taiwan, they were very excited and wanted to attend. They actively wrote experience papers and drew pictures. Unfortunately, because of the procedure of visa application, only three adult Japanese citizens and seven children had the opportunity to attend this first Fa conference for young practitioners. Among the seven children, the eldest was 14 years old, the youngest was 5, and it was the first time the three of them had left their parents and traveled so far. In the four-day stay at Taiwan, they all behaved very well.

We arrived at our hotel in Taipei around 1 am on December 25, but none of these children complained; instead, they helped the adults carry or look after the luggage. The next morning, we visited the Palace Museum. At the entrance, we saw Taiwanese Dafa practitioners practicing the exercises and distributing materials that clarified the truth about Falun Dafa. All of our group of young children joined them and enthusiastically began distributing flyers. Some who could speak Chinese distributed Chinese flyers, those who didn't speak Chinese distributed Japanese materials. Their innocent smiles and sincere greetings caused many tourists to stop and ask questions or accept the materials. A thick stack of materials was distributed in a short while. On the road back to our hotel, I asked the children to share their feelings about the activity. They eagerly told me, "It is hard to distinguish Japanese from Chinese people. Sometimes, I handed out the Chinese flyers to Japanese people or vise versa, but I still distributed them." Some said, "I'm very happy to hand out those flyers." Some said, "I'm so glad to give out flyers in Taiwan. I'll continue to distribute flyers when I return to Japan..."

During the Fa conference on December 26, the children who could not understand Chinese very well sat around an interpreter and attentively listened to the simultaneous translation. Young practitioners' sharing their cultivation experiences and the scene of the group reciting "Lunyu" (On Buddha Law) deeply moved them. Some children said, "So many younger children are able to practice the five-set exercises and recite Lunyu. I will study hard when I return home." When we went back to our hotel, the children took the initiative to study the Chinese version of Zhuan Falun with us.

One interesting story was about an eight-year old practitioner, who had left his parents for the first time and traveled to Taiwan. One morning, while the other children were still asleep, and an adult female practitioner in our group was practicing the sitting meditation, he woke up. After changing his clothes and folding his quilt neatly, he sat besides her and practiced the meditation.

On December 27, we visited Taiwan's Minghui School. Although there was a little bit of a language barrier, the children read the same book, Zhuan Falun. The principles of Truthfulness-Compassion-Tolerance are in their hearts. They studied the Fa, practiced the exercises and made handicrafts together. They were quite harmonious together. When sharing feelings of attending this Fa conference, a fourteen-year-old practitioner said, "This is my first time to attend a young practitioners' Fa conference, and it was so great! Taiwan's environment is very good and I hope that this kind of Fa conference can be held in Japan." Everyone applauded her and smiled.

Looking at these joyful children, I felt very happy for them. In Mainland China, under the high pressure and poisoned by the lies, so many innocent children do not have the opportunity to choose to believe in Truthfulness-Compassion-Tolerance. In countries outside China, these children work hard to learn Chinese and follow the principles of Truthfulness-Compassion-Tolerance in their daily lives. They are indeed very happy. 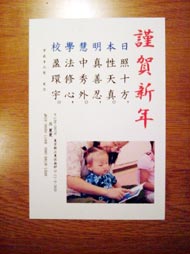 On the occasion of the New Year, Japan's Minghui School students sent greeting cards made by themselves to Minghui School children and other friends to encourage young practitioners to strive forward and introduce Minghui School to different levels of society.