(Clearwisdom.net) The unconstitutional trial of Tsinghua University students Yu Chao, Chu Tong and Wang Weiyu was originally scheduled to take place in the Chaoyang District Court in Beijing on January 9, 2004. After this was exposed, the venue was changed to a secret trial in a court near the Chaoyang District Detention Center.

After the planned trial of the three students was exposed on Clearwisdom Net, the government officials panicked. During the beginning of the secret trial, many uniformed officers and plainclothes police filled the court and the surrounding area. It was learned they were not on guard for the practitioners' family members; they were guarding against "outsiders"--people who have the courage and the means to expose the truth and uphold justice for these practitioners, and who are outside the realm of police control.

According to internal news sources, the persecutors who are part of the trial process received phone calls from overseas Dafa practitioners who tried to clarify the truth about the persecution to them. They were extremely shocked and afraid.

So far, no verdict has been reached, and the so-called "legal process" has not yet ended. We hope Falun Gong practitioners and kind-hearted people around the world will pay close attention to this unlawful trial and try their best to end this persecution. 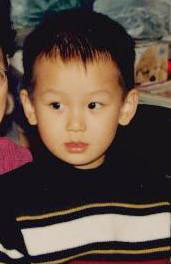 Yu Chao attended two classes taught by the founder of Falun Gong, one in Beijing and another in Tianjin. His wife Chu Tong, sister Yu Jia and father-in-law, who was awarded the title "Model Worker at the state department level," are all Falun Gong practitioners. The 35-year-old Yu Jia is a lecturer at the School of Economics and Management of Tsinghua University.

After Jiang started the persecution against Falun Gong in 1999, Chu Tong went to Tiananmen Square on October 27, 1999 and Yu Chao went in 2000. They unfurled a banner that read, "Falun Dafa is good." Arrest and detention followed. The police savagely beat Chu Tong during detention. After a secret trial in early 2000, she was sentenced to 18 months in prison. The government also cancelled Yu Chao's household registration and held him under criminal detention for one month, followed by one year of forced labor, which was served outside the labor camp.

When Chu Tong was released in the summer of 2001, she risked another arrest and wrote an article that was published on Minghui Net. She exposed the Jiang regime's persecution of Falun Gong with her own 1-1/2 years prison experience. Furthermore, she published a solemn declaration on Minghui Net, in which she stated the "guarantee statement" she wrote under duress was void.

In order to avoid further persecution, Chu Tong and Yu Chao were forced to give up their highly paid jobs and leave home, taking their son with them. In August 2002, Yu Chao and Chu Tong were arrested in Beijing by agents from the National Security Bureau and "610 Office."

According to an October 2002 report on Minghui Net, Chu Tong's father could not return home because he didn't want to be sent to a brainwashing class.

A happy family consisting of intellectuals from Tsinghua University was thus torn apart. Chu Tong and Yu Chao's experience is only the tip of the iceberg of Jiang's ruthless persecution of Falun Gong practitioners.

Parents worried over the arrest of their only son; family in the U.S. calls for help 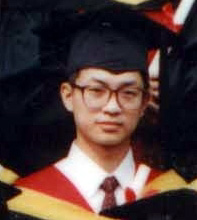 Mr. Wang Weiyu is 30 years old and his hometown is in Shandong Province. He is a very intelligent person and had studied hard, always earning good grades since high school. Before the college entrance exam in 1991, he received acceptance letters from five renowned universities, including Tsinghua University, Beijing University, Technology University of China, and Peking Union Medical College. He eventually chose the School of Delicate Instruments and Mechanical Devices at Tsinghua University and began his nine-years of study there. He was forced to leave the university in 2000 because he practiced Falun Gong.

During his five-year undergraduate studies, he was awarded the "Outstanding Student Medal, Outstanding Student Scholarship, Ultimate Scholarship for Instruments and Mechanics in China" (the first time this was awarded to an undergraduate student) as well as a Phillips Scholarship. He was a class leader, class Youth League chairman, deputy president of the Science Association, and deputy chairperson for the Youth League in the School of Precision and Machine Technology.

Because of his outstanding performance and moral character, the Department of Precision and Machine Technology admitted him to a Ph.D. program in 1996, with exemption from examination. His mentor was a noted professor of optics information-processing. Because of his diligence and the assistance from a well-known mentor, Weiyu progressed rapidly in his professional studies. One year after he joined a research project, he published several articles in Chinese and international professional journals and was awarded a patent, number 00103362.X.

Friends knew his sincerity, compassion, selflessness and tolerance and liked to be with him. Many people treated him as a good friend and were willing to confide in him.

On August 12, 2002, agents of the National Security Bureau arrested Wang Weiyu. His family was very anxious and worried about his safety. Wang Weiyu's brother-in-law, Li Guoqiang, who is a Ph. D. candidate at the University of Cincinnati, urgently called the media, government agencies and people in society to help secure the release of Wang Weiyu.

Mr. Li Guoqiang told a reporter that Wang Weiyu was forcibly suspended by Tsinghua University in 2000 because he practiced Falun Gong. After overcoming numerous difficulties, Wang Weiyu found a job at a foreign company in Beijing. On August 12, 2002, Wang Weiyu was sent on business in Shanghai and was arrested by National Security Bureau agents on his way to the train station.

Mr. Li Guoqiang said that in the more than one year since Wang Weiyu's arrest, Wang's family has been trying to get in touch with him, but their arduous search has not yielded any results. His parents are extremely worried about their only son's safety and well-being.

“Policeman Who Knows the Truth about Falun Gong: "I'm Sure I Will Become a Dafa Disciple!"”