(Clearwisdom.net) "Beijing - Tel Aviv" is a Chinese magazine that was established by an Israeli businessman. Most of its readers are Chinese labourers who have come to Israel for work.

Ever since the beginning of its publication in January 2003, "Beijing - Tel Aviv" has provided its readers with news, information and services that are related to culture and life. In addition, it has been publishing material that promoted the Jiang regime's propaganda and defamation against Falun Dafa. Apparently, there is a manipulative hand behind the scenes directing things to persecute Dafa.

For instance, right after an explosion in Tel Aviv that occurred in February 2003, an article was published in the magazine, referring to the source of the information as coming from the Chinese Embassy, reminding readers to be more aware of the issue of safety. Then the subject of the article abruptly switched to Falun Gong. It misled the readers by linking the act of terrorism to Falun Gong practitioners who clarify the facts in Chinatown.

In July 2003, "Beijing - Tel Aviv" allocated more than a full page to another article to frame Falun Gong entitled, "Falun Gong Commits another Monstrous Crime." This implicated Falun Gong in the Chen Fuzhao case, where seventeen people were murdered in Zhejiang Province. This misled readers a second time and was intended to destroy Falun Gong's good reputation.

In September 2003, the magazine published a commentary by the Chinese Department of Foreign Affairs after Falun Gong practitioners filed a lawsuit against Jiang in Chicago, USA. The commentary said the lawsuit was based on "falsified accusations."

Ever since the first defamatory article was published in the magazine, Falun Gong practitioners in Israel have been trying to reach the publisher to explain the facts of the persecution so that they could understand Dafa and realise the truth of what is happening in China. Practitioners also pointed out that misleading the readers was not correct, and that this went against the magazine's main objective of providing a service to readers.

The initial response from the magazine was that they wanted to remain neutral, but they also did not want to "irritate the Chinese Embassy." However, these defamatory and poisonous articles were published one after another.

As a result of this, practitioners undertook a legal action. Via a lawyer, practitioners negotiated with the publisher and requested that they publish an open apology and an immediate correction of their mistake. Otherwise, a lawsuit would be filed in court against the publisher.

The publisher agreed to apologise, and carried an apology in its last issue of 2003. However, the statement was vague, and did not show any sincerity. When the publisher was approached by the lawyer again, they admitted the apology was not clear enough.

During the first 2004 issue and the first anniversary of the magazine, another apology was published. The full text of the message is as follows: 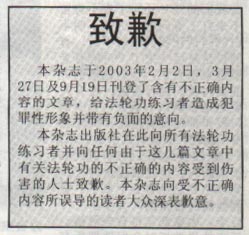 "In 2003, Beijing - Tel Aviv published articles containing incorrect information on February 2, , July 27 and September 19. These articles were negative, and have shaped a criminal image of Falun Gong practitioners. The publisher would like to apologise to Falun Gong practitioners and all others who may have been harmed by these articles. We would also like to deliver an apology to the readers who have been misled by the incorrect coverage."

The publication of an article that has originated from the Chinese propaganda machine seems to bring temporary benefit to the publisher on the surface, but has poisoned a lot of innocent sentient beings. On the contrary, a simple apology seems to be made possible by the pressure of legal obligation; however, it has saved a lot of sentient beings.

From publishing the defamatory articles to making an apology last year, "Beijing - Tel Aviv" has followed a tortuous route. We sincerely hope that all of the media and their staff won't need take this incorrect road, so that a correct choice could be made for the future of themselves and others.

“Germany: Some Stories From The First Minghui Winter Camp in Erbach (Photos)”