I have cultivated Dafa for four years. Recently during a local Fa conference, we were surrounded after somebody reported us to the police. With powerful righteous thoughts most of the practitioners found a safe way out; only a few, including myself, were captured. 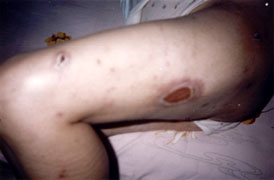 At the time, I was six months pregnant, but the policeman still pushed me to the ground, and beat my back and stomach with a wooden rod before forcing us into a crowded vehicle. I tried to escape but was caught. They jumped on me and again beat me with the stick, while grabbing my hair and punching my face. My face and mouth were covered in bruises and blood, I had loose teeth, and my clothes were bloodstained.

In the police station I tried many times to escape but my righteous thought were not strong enough. In the end, because they were afraid to be held responsible for beating a pregnant woman, they released me after extorting 3000 Yuan (the average monthly income of a Chinese worker is about 500 Yuan) from my husband.