) On September 1, 2003, New York Falun Gong practitioners were invited to participate in the annual "West Indies" grand parade held in Brooklyn. It is estimated that there were about 2,500,000 spectators this year. New York City Mayor Bloomberg, New York Governor Pataki, Senator Clinton and many other prominent figures took part in the parade. 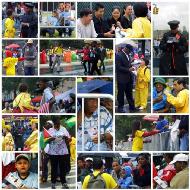 Spectators learn about Falun Gong while watching the parade

When learning about the persecution of Falun Gong practitioners in China,