Explaining the Truth to the Editors and Reporters of ElComercio 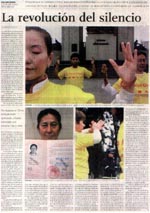 In June, we found that the website (www.elcomercioperu.com.pe) of ElComercio, the biggest newspaper in Peru, published two articles from Xinhua.net [State-run media in China], the Chinese government''s mouthpiece, that slandered Falun Dafa in reporting the SARS epidemic. In order to be responsible to the newspaper and the Peruvian people, we came to the paper''s editing office to clarify the truth to the editors and the reporters.

The newspaper building has one hundred years of history and has two levels of gates where guards stopped us and asked if we had appointment. We honestly told them no and that we are Falun Gong practitioners coming to clarify the facts since the paper''s website published articles that did not reflect the truth. We asked them to find the editor or reporter in charge. While we were waiting we told the guards about the persecution in China. They gladly accepted our materials and helped us to make phone calls. We were then able to go to the editor''s office on the second floor.

A sincere young reporter in charge of the website met us. Upon seeing pictures of the torture of Falun Dafa practitioners in China and hearing the truth about Falun Gong, he was shocked and felt very sorry about the publishing of the false articles. We then were taken to a young reporter in charge the publishing and told him the facts. We started by talking about what Falun Gong is, the introduction of Falun Gong in China, and how it is now practiced freely in more than 60 countries. Next, we mentioned how the Chinese Embassy unreasonably canceled practitioners'' legal passports. We told them that beginning on July 20, 1999, the Jiang'' regime started the brutal oppression of Falun Gong and how it used the media to cover-up the persecution, distort the facts, and viciously slander Falun Gong. We also spoke on how the political persecution has extended overseas and has harmed the democratic rights in other countries.

Three years ago, we tried to deliver Falun Gong materials here and the guard did not even let us in. Now it is different.

During the interview of Western practitioners, the reporter told us that he had gone to the Chinese Embassy to verify the facts about the cancellation of practitioners'' passports and asked to interview the officials. However, the officials in the embassy refused to see him. Through the microphone on the gate, someone told him that they would send him some materials regarding the issue. On July 16, Elcomercio published an article with pictures titled "La revoluci del silencio" [Silent Revolution] that introduced Falun Gong. For the first time, Elcomercio, the paper read by people from all walks of life from the President and the parliament members to ordinary citizens, brought the truth about Falun Gong to thousands families in Peru as well as others in the surrounding South American countries.

The article on Elcomercio brought about a strong response in society. An influential radio station -- CPN News made an appointment with us for an interview in two days. We prepared many pictures and materials. During the interview, Western practitioners answered the questions from the host who often paused to look at the color pictures. The host was a local Peru-born-Chinese who was famous. Because our energy field was very peaceful, he unknowingly passed the half hour time limit and kept zealously asking questions. The red light flashed several times to remind him that the time was up. In the end, the host allowed a practitioner to say few words in Cantonese to the Chinese audience. The practitioner affectionately told the Chinese people in Peru, "Falun Dafa is a advanced Buddha cultivation practice. Please do not believe the Jiang'' regime''s slanders. Please remember: Falun Dafa is good! Zhen-Shan-Ren is good! It will bring you a bright future."

We gave the host a copy of Falun Gong, a picture magazine and a flyer about Falun Gong and asked him to show it to his friends and relatives. He was very happy about the presents. At 7:00 p.m. on Saturday, July 19, the station aired the entire interview. Audiences from all levels heard the facts about the persecution of Falun Gong and about the lawsuits again Jiang Zemin taking place in several countries.

The Interview with No. 5 America TV Station

On the afternoon of Sunday, August 10, a car slowly approached us when we were sending forth righteous thought in front of the Chinese Embassy. A practitioner smiled and handed him a flyer. The gentleman politely thanked the practitioners, and inquired as to how long we would stay there. A practitioner recognized him as the Channel 5 boss at an America TV station. Soon after he left, a lady reporter came with a microphone and a professional cameraman. It was at the same time for sending forth righteous thoughts. The reporters witnessed this peaceful and serene scene and typed for 15 minutes. Possibly affected by the atmosphere, the reporter sat down on the ground and started the interview. A western practitioner flipped through a magazine and explained the pictures of torture in China. The reporters quietly listened and wrote things down while the cameraman constantly took pictures. The practitioner told the reporter that Jiang Zemin is currently being sued for genocide, torture, and crimes against humanity. The reporter was eager to learn more about Falun Gong and asked us to send more pictures and video that evening. We were told that the station would show the program next day.

On Monday, Channel 5 TV Station had some technical problems and had to stop broadcasting all news programs that day. However, we believed that the Falun Gong'' program should definitely be show. The next day, the station showed a preview of the Falun Gong program. On the third day''s morning news, it showed the interview with Falun Gong practitioners. It was so wonderful.

Channel 5 America TV covers a broad area including Peru, most of the Middle and South American Spanish-speaking countries, and even Florida, U.S. We thank Teacher's infinite grace.