"Mountains in the Clouds Above the City" - A Wondrous Sight Appears In Zhengzhou City, Henan Province (Photo) 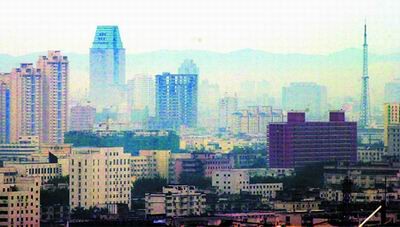 At 11:22a.m. on September 7, upon receiving a phone call, the reporter hurriedly went to the balcony on the 21st floor of the Henan Daily newspaper building, only to see a smoky haze lingering in the distance, complicated and confusing.

Above the construction rising in the southwest of the city, a light blue and green belt in the shape of a long and rolling mountain ridge appeared. (Please see the picture). From the reporter's vantage point, the ridges of mountains extend from south to north for dozens of kilometers. There were mountain peaks sticking out, and layers upon layers of clouds and mist were quite enchanting.

Looking in distance from the high building, the entire light blue-green belt appeared in layers upon layers. After a while, the south part of the mountains gradually faded, and another mountain came up in northwest direction. The shape of the mountain kept changing. Sometimes the big mountains became clearer, and sometimes the smaller hills became clearer. It seemed that they were constantly moving and shifting, like in a dream. At about 1:00 p.m., the scene gradually melted into the sea of clouds.

Crowds of people standing together with the reporter on the roof of the building saw this phenomenon and were amazed. Many people were very excited and said that it was the first time they had seen such an unusual phenomenon.

A senior engineer at an observatory said to the reporter, "It is quite rare that such a phenomenon appeared in Zhengzhou. I've been working at the province's observatory for more than 20 years, but I've never seen anything like it."

“Canada: Clarifying the Truth on "Clubs Day" at University of Victoria (Photo)”