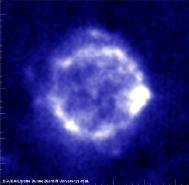 SCUBA detected a shell of cosmic dust about 12 light-years across in Cassiopeia A. The black and dark blue colors represent fainter emission; the light blue and white show brighter areas of dust.

Editor's note: Master Li Hongzhi said in Lecture at the US East Coast Conference: "Modern science has already discovered continuous formation of new celestial bodies and explosion of old ones. Now newspapers also have been reporting that new galaxies appear where none existed before, and that many ancient celestial bodies are decomposing, with many new ones emerging. This is happening in very far and remote cosmic bodies. Slowly it's getting closer and closer to the dimension that's visible to our human flesh eyes." Master Li further pointed out in Explaining the Fa at the 2003 Washington DC Fa Conference, "When faraway cosmic bodies disintegrate, to people it looks like a magnificent sight and something to explore. But when cosmic bodies right in front of them disintegrate, humankind won't think it's a magnificent sight anymore. Now when those enormous cosmic bodies and gigantic beings disintegrate, how terrifying a thing is that?"

The following news reports a new discovery about clouds of cosmic dust formed by exploding stars. The new detected cosmic dust which is more than 1,000 times of what has been discovered previously seems to tell us that the universe is undergoing an unprecedented changing -- the old stars are being eliminated.

According to a report from Space.com on July 31, researchers re-examined the remnant of a supernova called Cassiopeia A and found a thousand times more smoke-like dust particles than had been detected before.

Astronomers considered that the young universe was mostly hydrogen and helium. Heavier stuff -- dust, metals and all the other ingredients needed to make planets, plants and people -- was forged in stars and, especially, in the catastrophic explosions of the most massive stars.

These supernovae, as they're called, cast material into space that then go into the birth of subsequent generations of stars, which in turn create ever-heavier elements. Astronomers long presumed that planets could only form around later-generation stars, where lots of leftover dust and rock would orbit each newborn star. Researchers speculate that similar explosions in the young universe made the dust that has been found in some of the earliest galaxies.

Astronomers consider supernova as factories of cosmic dust. The newly detected dust shell in Cassiopeia A contains up to four times the mass of the Sun. Its star, probably 30 times more massive than the Sun, collapsed about 300 years ago after using up its primary fuel. Astronomers consider that a black hole was formed out of some of the remaining mass and the rest was ejected in the explosion. The material is still zooming outward at 22 million mph (10,000 kilometers per second).

This new study, detailed in earlier July in the journal Nature, used the SCUBA submillimeter-wavelength camera on the James Clerk Maxwell Telescope in Hawaii.

“Greece: A Kind-Hearted and Sincere Man”