, Falun Dafa, also known as Falun Gong, is an advanced exercise and meditation practice system of the mind and body on ancient wisdom; Li Hongzhi introduced it to the public in 1992, and taught free of charge; it is practiced in over sixty countries by about 100 million people in Asia, Africa, Australia, Europe, North America and South America; and

Whereas, Falun Dafa has helped people around the world improve their health, calm their minds, and deepen their understanding of life and humanity. It has also inspired people from all walks of life to turn away from drugs, alcohol, violence and other bad habits toward a more harmonious life in addition to five gentle exercise that improve energy circulation in the body. Falun Dafa emphasizes the cultivation of ones moral character through following the universal principle of truthfulness-compassion-tolerance, and

, Falun Dafa contributions to society are widely recognized by leaders throughout California, where over 150 proclamations, resolutions, and citations have been issued in honor of Falun Dafa and Li Hongzhi. More people in California are learning the practice and purifying their hearts, energizing their bodies, and breaking old additions and bad habits and, in turn, families are living more in peace, and communities are embracing virtue;

Now, Therefore, be it Resolved

that the board of supervisors of the County of Los Angeles does hereby proclaim August 9-16, 2003 as "Los Angeles County Falun Dafa Week".

Chair of the Board 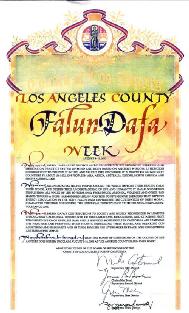