(Clearwisdom.net) The Russian newspaper Life reported on August 13 2003 that a stone from outer space was found in a Moscow suburb. 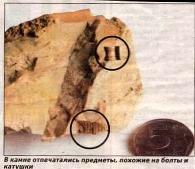 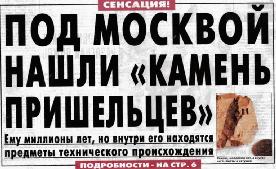 The report said the stone was a few million years old but scientists found technological products inside it.

From the photo, one can see objects that look like a screw or a nut. It is estimated that the stone was formed in Paleozoic Era. According to Darwin's theory of evolution, no human beings existed on Earth at that time.

Not long ago, there was another stone found in Galus province in Russia. Under an X-Ray scan, scientists found 8 objects inside the stone that looked like screws or axils with threads on them.