(Clearwisdom.net) Li Yuling has left us, a great loss to us. When I recall the little things I remember about her, although they are trivial, they show the selflessness and altruism of a great enlightened being and her rock-solid faith in Dafa.

In 2001, when Yuling was first released from the mental institution in which she had been wrongly incarcerated, the drugs they had forcefully administered to her had damaged her nervous system so severely that her behavior was somewhat abnormal. However, she didn't mind other people's comments and fellow practitioners' misunderstandings. She did everything possible to get truth clarification materials. Then she used them to offer salvation to people. She always wanted more materials than she received and she tried her best to get more.

Later, to lighten the load of other practitioners, she volunteered to distribute these materials, and that's how we got to meet more often. Every time we gave her materials, including VCDs and pamphlets, she always took them home and checked them carefully. If there were misspelled words, she wrote them on a piece of paper and gave it to us the next time. If the VCD was unclear, she always let us know the next day. If there were large mistakes, she always reminded us to study the Fa well and not develop attachments to doing things.

Now when I look back, she truly was a great help. She not only distributed the materials, she also did lots of truth clarification work. She never stopped doing this, even on the so-called "sensitive days." Every time there was feedback from people, including what programs people like to watch and what things they like to read, she always gave us the information in time, so we could edit and create truth clarification materials people really like to see, according to her suggestions. I remember back then, when we hadn't yet started to download materials from the Internet to make cassettes, she recorded many cassettes using a VCD player and her home equipment. The feedback was outstanding. From then on, we began downloading radio broadcast material from the Internet to make truth clarification cassettes.

For a period of time we encountered financial difficulties. After Yuling learned about this, she gave us some money and told us if we ran short of money we should let her know. She said she knows many people so she can help us. Almost all of our money came from her. Once, we learned by accident that most of the money we received from her came from her personal savings. She always gave us the money without saying anything, so we assumed the money was pooled by a group of practitioners.

During the two Party meetings in March 2003, the police tried to arrest her and send her to a brainwashing center. She firmly resisted the persecution and didn't open the door for the thugs. She also phoned us and asked us to send forth righteous thoughts. In those days when she fought the evil, a great conflict arose at our Dafa materials production site. We really hoped she would solve the problem for us. Later she said to me on the phone, "Think of the bigger picture!" The incomparably pure compassion behind this sentence penetrated levels upon levels of selfishness that had wrapped up my heart, and reached the depth of my heart. Later, we all discovered our own attachments and solved the conflict. The Dafa materials production site continued to operate safely.

In June, a practitioner who had contact with us was arrested, which jeopardized the safety of our materials site. Yuling and another practitioner spent two days going to and from the materials site, and with righteous thoughts they were able to transfer everything to a safe place. Then, she began making arrangements for practitioners who were forced to stay away from home. Later, she frequently came to our meeting location to expose a spy. Too many things happened in that period of time, and Yuling was arrested on the evening of June 25 while distributing truth clarification materials.

Yuling has left us her pure compassion, the complete and unspoken sacrifices she made for Dafa, and the selfless help she gave to fellow practitioners. She is gone. Every time I pass by the place where we often met, I recall her always carrying large and small bags of materials. I couldn't help but look at the places where she stood and wish she was still standing there, smiling at us. Her face was red from the freezing wind and it looked like plum blossoms in the snow that bloom in the dreary cold.

We didn't know her for a very long time. The above are only some things we knew about her. 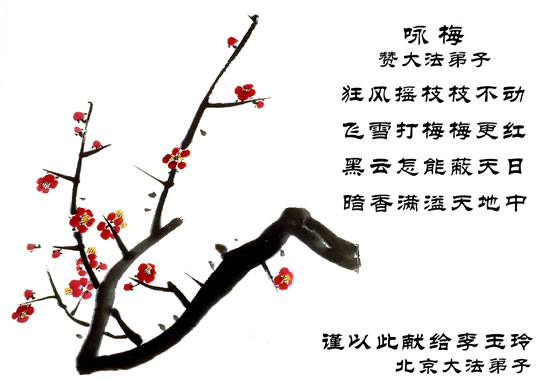 “My Experiences Clarifying the Truth in Chat Rooms”