(Clearwisdom.net) The annual Edinburgh International Art Festival Parade took place in Scotland's capital on August 3. According to figures announced by the organization committee, 150,000 spectators from all over the world watched the parade. More than 1,700 people in 99 groups participated in the event this year. The criteria used to choose the winners of the parade's 3 prizes include expression, action, spectators' feedback, the group's role in society and so on. The committee evaluated all parade teams based on the above standards. After getting the first prize in the community category last year, Falun Gong once again won the first prize for 2003.

One practitioner who took part in the performance stated, "Falun Gong practitioners thank the people of Edinburgh and the world who supported them during this event. Winning this prize for the second year in a row truly shows Falun Gong's popularity in the western society. This heartfelt support creates a stark contrast to the campaign of genocide and propaganda that Jiang Zemin has used to turn people against Falun Gong in China, where people who practice Falun Gong are not rewarded but are tortured, raped, beaten and murdered. We hope that through winning this award, we can allow more people to learn the truth about Falun Gong and see through Jiang's wicked lies."

Falun Gong's team was formed by Chinese waist drums, traditional dances and a float. It had a unique style among the many performance groups and was full of rich oriental culture, as well as friendliness, beauty and creativity. 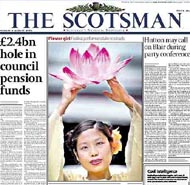