The Chinese communist regime ordered the army to block villages with SARS infection. In Sichuan Province, three provinces in Northeast China and Guangdong Province, SARS has spread to counties, towns and villages. The government ordered army and police to take charge of the areas to block the information and prevent the spread of news to other areas.

As reported by the Epoch Times from China, the army blocked villages with SARS in Guangdong, Sichuan and three provinces in Northeast China. The means that army used to quarantine villages were to first cut telephone lines, prohibit anyone from leaving and blocking the news. In one village, someone trying to secretly escape was shot and killed. 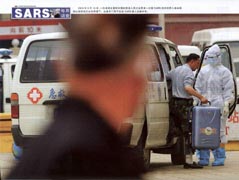 The best-selling journal in China, "Finance and Economics Journal" started to report on the SARS spread in depth in April. The government criticized the journal in June and distribution of the June 20 issue was banned.

Some overseas Chinese from Taiwan, Hong Kong and Singapore went to China to do business or visit relatives and came across village blockades. When they reached those blocked areas, local government authorities intercepted them. Local people talked about the SARS spread in private, leading to the village blockade by the government. The army controls these areas. People fear being killed for leaking the news and do not dare to spread the news. Some people from Taiwan and Hong Kong who know the information do not dare to spread the news for the safety of their business and family members in China. Others left China in a hurry for fear of being killed by the communist regime as witnesses.

Some people from Taiwan and Hong Kong know the news of the village blockade by the army in China, but are reluctant to accept interviews due to concern for their safety.

One Chinese official disclosed in private that the government's finance and public health system cannot handle the SARS spread in rural areas and that the communist regime adopted traditional means to control the plague by just isolating infected people, but not offering any help. Those isolated areas will be disinfected on a large scale after all the people inside die. A policeman from Shenzhen Police Station said, "Hospitals are not in charge of disposing of the corpses of SARS victims; this has been taken over by the military and police. All bodies will be cremated by the army."

It is said that over 10,000 people in total died of SARS as of the end of June. The Chinese government blocks the news completely and prohibits any media from disclosing any information. The Chinese propaganda department issues order to media that all news on SARS is distributed by Xinhua News Agency and all other areas are not allowed to carry any news on SARS without permission. Before this order, the Ministry of Propaganda clamped down on newspapers to prevent "uncontrolled media" from leaking the news.

WHO declared last month that Asia did not have SARS. SARS appeared in south China at the end of last year and infected more than 8,000 people worldwide. In Hong Kong, SARS was reported at the end of February and more than 1,700 people were later infected, among them near 300 died. Throughout the world, SARS infected nearly 8,500 people and killed more than 800 people.

SARS is believed to have originated in South China. It can cause severe pneumonia and death. After the disease spread from China, more than 20 countries were reported to have cases of SARS.