(Clearwisdom.net) Ming Pao July 9 report: though Tung Chee-Hua deferred Article 23 legislation due to international pressure, about 50,000 people participated in a rally sponsored by the Civil Human Rights Front despite the hot weather. 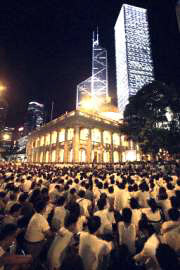 Many people were crowded into the Charter Garden, Charter Road, around Queen's Statue Square and HSBC Hong Kong, and the police cordoned off Charter Road along with two other streets.

Twenty-two legislative council members, who opposed the second reading of the National Security Bill on July 9, got on stage at around 9:15 p.m. They greeted the people and took the lead to call for democratic elections and returning power to the people. They also asked the people to continue their efforts.

At 9:40 p.m., the candlelight vigil reached to its conclusion, but there were still guests and citizens giving speeches on the stage. Many people lingered afterwards and removed trash from the site.

The sponsors were pleased to see the presence of 50,000 people, and the rally was also in a good order. Spokesperson for the Civil Human Rights Front Tsoi Yiu-cheong said that they would not rule out organizing another parade and rally.

The protesters left peacefully at around 10:00 p.m., and the police opened all roads that were cordoned off during the rally.

“Norway: Sending Forth Righteous Thoughts at the Chinese Embassy in Oslo (Photos)”