Hawaii Magistrate Judge Kevin S.C. Chang Grants Plaintiffs' Motion to Judgment by Default in the Lawsuit against the Head of 610 Office

On May 15, 2002, Ding Guangen, the Propaganda Minister of China and also the vice head of the "610 Office" (an agency specifically created to persecute Falun Gong, with absolute power over each level of administration in the Party and all other political and judiciary systems) was served with a class action lawsuit. The complaint was filed in the United States District Court for the District of Hawaii.

On May 13, 2003, the Honorable Magistrate Judge Kevin S.C. Chang approved the plaintiffs' motion for judgment by default and found that Ding Guangen was guilty of the crimes listed in the complaint. Below is the order from the United States District Court for the District of Hawaii.

For The District of Hawaii

Order Granting Judgment By Default As To Liability

Plaintiffs' Motion For Judgment By Default As To Liability having come on for hearing on November 13, 2003 at 9:00am before the Honorable Magistrate Judge Kevin S.C. Chang. Plaintiff having been represented by William J. Deeley and no opposition having been filed. The Court having reviewed the moving papers and the files herein and having found good cause.

It Is Hereby Ordered And Adjudged that Plaintiffs' Motion to Judgment by Default is Granted in an amount to be determined according to proof on damages in this matter to be submitted on or before August 28, 2003. 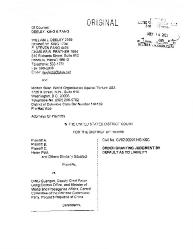 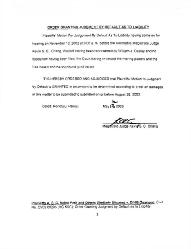 “US Congressman John Tierney: We Must Continue to Send a Clear Message to China That the Persecution of Falun Gong Practitioners is Detrimental to Its Standing in the International Community [May 23, 2003]”