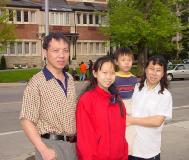 áIn 1978, when Mao Fengying was still in middle school, she suffered from acute hepatitis. The long term treatment she received was never able to cure the disease.

Fengying became a surgical nurse in Lanzhou Medical College No. 1 Affiliated Hospital. She married Ye Tonggui, a graduate student in the hospital, and later Fengying gave birth to daughter "Jin."

From birth Ye Jin needed medical help, and she received a lot of plasma. When she was six months old she was diagnosed with hepatomegaly, and one year later her liver function showed distinct abnormalities, which became more and more severe each year. Finally, she suffered from severe swelling of the liver and spleen.

Little Ye Jin was sickly thin, with a yellow complexion, and shorter than other children her age. Their doctor said her disease was very serious, so Fengying and Tonggui took Ye Jin to see well-known doctors, who all shook their heads after seeing the girl.

While Fengying was taking her daughter to see doctors, her own liver disease became more and more serious. She had continuous pain in her liver and spleen, accompanied with nausea, bloated abdomen, loss of appetite, insomnia, fatigue, anxiety, and tremors. In 1995 she suffered from a swollen spleen, and several hospitals diagnosed chronic active hepatitis type C.

This condition normally develops into hepatocirrhosis and liver cancer. Fengying visited the hospital several times in a two to six month period. Tonggui went to Beijing for his Ph.D studies. After graduating, he worked at the earthquake bureau in Beijing. Missing her far-away husband, Fengying became gloomier. She took medication but the old disease did not improve, and new diseases appeared. She got severe atrophic gastritis, nephritis, and hypotension. Her body was extremely weak, her legs were swollen and heavy and she could not lift them. By 1996 Fengying could no longer work and could only convalesce at home.

Fengying went to Beijing to see famous doctors about her illness many times. Once she asked a doctor: "How long do you think that I'll live?" The kind-hearted doctors comforted her, "I estimate that you have one to two years." At that moment, Fengying's spirit exploded with extreme inner pain. She became very hot-tempered, and even beat and abused her eighty-year-old father and Ye Jin.

In 1996, Tonggui went to the US to work. He was permitted to bring his family as well, but because of Fengying and Ye Jin's illnesses they were unable to go. One day three months after Tonggui arrived in the US, he received unbelievable news: Fengying and Ye Jin had completely recovered. They wanted to come to the US.

Tonggui could hardly believe it, but when he welcomed Fengying and 9-year-old Ye Jin into the country three months later, he saw a miracle. They had recovered after practicing Falun Gong.

Fengying had tried many methods to treat her disease: folk prescriptions, qigong, burning joss sticks, and Chinese medicine. In the end she finally decided to try Falun Gong. At first, she did not believe in qigong, but the facts speak for themselves. When Tonggui saw Fengying and Ye Jin's miraculous recovery, he began practicing Falun Gong as well.

One year after her arrival in the US, Fengying gave birth to their son Kevin. Colleagues and relatives in China could not believe this news, and even said he must be adopted. From a medical perspective, hepatocirrhosis patients cannot become pregnant. But no one can deny the facts, and Kevin is very healthy and bright.

The family has since relocated to Toronto, Canada.

Although she is further and further from the pain, Fengying still thinks of those colleagues, friends, and fellow patients in the hospital who suffered from diseases. She wants to go back to China to share her experience that practicing Falun Gong can change one's fate, but the persecution of Falun Gong prevents her from realizing her wish.

Fengying knows the propaganda against Falun Gong in China is not true, and she hopes that the story of their family can enlighten those in hardship not to lose hope in the tribulation. She often phones China to tell others about the great benefits her entire family has received from practicing Falun Gong.

“There Are Opportunities to Improve Xinxing Everywhere While Validating the Fa”