Practitioner Travels Around the World for One Wish; Another Calls for Rescuing Younger Sister Who Was Abducted After Joining Lawsuit against Jiang (Photos) 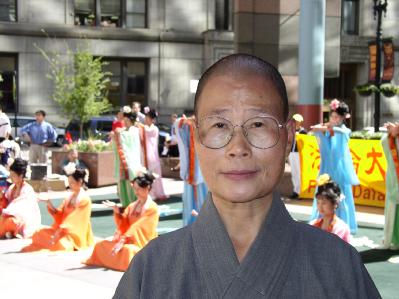 (Clearwisdom.net) About 2,000 Falun Gong practitioners gathered in Chicago to support the lawsuit against Chinese former dictator Jiang Zemin. Falun Gong practitioner Shi Zhengtong from Taiwan (photo above) said, "I came to Chicago to appeal to the U.S. government and citizens to support the genocide lawsuit against Jiang, to let people in the world know that it is a truth that good will be rewarded with good and evil with evil. America is a democratic and free country that respects human rights. I thank the U.S. government for the support it has given to Falun Gong and want to express my deepest respect."

She said, "I was a Buddhist nun for over ten years before I became a Falun Dafa disciple. I had headed and taken charge of a Jing-she (a nunnery in Taiwan). I started to practice cultivation by traveling on foot and carrying a single bowl to feed myself. Finally one day in 1998, I encountered a Falun Dafa practitioner who gave me a copy of Zhuan Falun (the main text of Falun Dafa). Back in my hut for cultivation, I raised the book above my head respectfully, and then opened the book. When I saw the picture of Teacher, my tears began to fall. The Master I had been searching for through so many hardships was just in front of me. I firmly believe that this is the manifestation of the great Buddha Fa in the human world. My health fully recovered very soon after I dedicated myself to the cultivation of Falun Dafa. Like a person reborn, I was revitalized and became joyful all over again. Since then I have been totally freed from years of illness and medication."

She continued, "Falun Gong has spread far and wide around the world, and millions of people have benefited from the practice. However, such a wonderful practice was persecuted brutally by the Jiang regime since July 1999. To appeal to governments and people of the world, I have been traveling to different countries to appeal. I have been to Hong Kong, Japan, India, Indonesia, Nepal, France, UK, Russia, Switzerland, Greece, Mexico, Canada and the U.S. I traveled around the world for one wish: Stop the Persecution of Falun Gong." 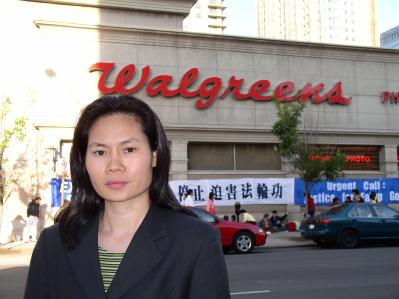 Mrs. Lanxiang Zhao's sister, 25-year-old Meiyu Zhao was abducted from her home by Chinese officials for her attempt to become a plaintiff in the class-action lawsuit against Jiang Zemin on May 20. Police claimed she would be sentenced to at least 7 years in jail.

Ms. Lanxiang Zhao is from the Washington DC area. She came to Chicago to appeal for the release of her sister Meiyu Zhao. She said, "My sister Meiyu Zhao was sent to forced labor camp because she practices Falun Gong. When she learned that Jiang was being sued in the U.S. Federal Court, she wanted to become one of the plaintiffs in the lawsuit."

She said, "My family in China was harassed constantly. The police threatened my husband and claimed that my sister would be jailed for at least 7 years. Jiang initiated the persecution of Falun Gong and so many people have died or been imprisoned at his orders. The victims want to sue him but instead are put in jail. Meanwhile, the culprit is still at large." Lanxiang's three other sisters and mother have practiced Falun Gong since 1998. Since July 20, 1999, police have been harassing her family. During holidays they were not allowed to leave home. Her sister was previously sentenced to one and a half years of forced labor because she went to Beijing to appeal for Falun Gong.