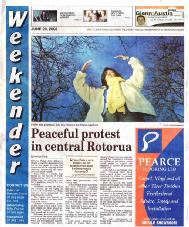 Rotorua Falun Dafa followers staged a peaceful demonstration during the week to raise the awareness of the ongoing action overseas concerning the exercise and belief regimen.

Falun Dafa is a regimen that works on the beliefs of truth compassion and tolerance with exercise positions similar to position used in Tai Chi and yoga.

Protesters all over the world are fighting for the rights of Falun Dafa followers in China who are being prosecuted for practicing the regimen.

The regimen was banned in China in 1999 and has been a hot topic ever since.

Chinese communist Party leader Jiang Zemin ruled Falun Gong illegal, and those who practiced the regimen would be imprisoned and tortured.

Followers have died and been tortured for the cause, and thousands of people throughout the world are attempting to stop the ongoing punishment, local Falun Dafa practitioners Nick Chung says.

Although far way from the action, Nick says the demonstration was more about making New Zealanders more aware of what was still happening overseas.

Last year, Rotorua was visited by Falun Dafa practitioner Zhang Cuiying, who displayed her traditional Chinese art with an exhibition which asked people to support the freedom of choice to practice Falun Dafa.

Although an Australian resident, Cuiying had been imprisoned when she had returned to China to protest against the Government's move to ban the regimen.

Now she travels the world telling of her plight and trying to collect support for the Falun Dafa cause.

A local practitioner who does not want to be named said she had been practicing Falun Dafa for a long time, and says the regime helps clarity in her mind and through it, she suffers less stress.

"Practicing has really helped me."

"Falun Dafa is not a religion, it is not political and is about the betterment of humanity." She said.