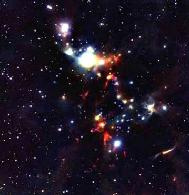 GAINESVILLE, Fla. --- University of Florida astronomers discovered the cluster of infant stars in this undated image in the constellation Perseus, about 1,000 light years from Earth. The cluster is home to several hundred young and forming stars -- all less than a million years old -- and seven planet-forming disks. The discovery doubles the number of such disks yet discovered and expands the territory that might yield new planets. The image was obtained with a University of Florida-built near-infrared camera and multi-object spectrometer at the National Science Foundation's Kitt Peak National Observatory near Tucson.

(Clearwisdom.net June 1, 2003) According to Science Daily Magazine's report on May 27, 2003, a mammoth sky survey led by University of Florida astronomers has uncovered seven planet-forming disks in clusters of young stars, doubling the number of such disks discovered and expanding the territory that might yield new planets. The astronomers worked at the National Science Foundation's 2-meter, or 88-inch, telescope at the Kitt Peak National Observatory in Arizona, using a UF-developed near-infrared spectrometer and imager.

The disks, composed of giant clouds of gas and dust that surround infant stars, are around 1,000 light years away, about four times farther away than most disks seen previously. They also are by far the biggest yet observed, which suggests that planets, known to coalesce in such disks as they rotate, may exist at much greater distances from stars than any yet discovered. This observation could lead astronomers to expand the areas in which they search for new planets, a search that has so far been confined to stars' immediate vicinities.

Astronomers used to think that stars formed in relative isolation. But over the past two decades, research by Florida group and others has shown that stars usually form in clusters - celestial birthing grounds. Astronomers have shown that the majority of stars in such clusters are formed with circumstellar disks. So while it wasn't unusual to find the disks, the surprise was that they ranged in size from 10 to 100 times larger than any of the handful of similar disks yet seen and imaged - with each disk stretching thousands of astronomical units in diameter. One astronomical unit, the distance from the sun to Earth, measures 93 million miles. The diameter of our solar system is approximately 60 astronomical units.

“"I Learned Falun Gong, Now I Am Healthy Again"”

“A Police Officer Says, "Falun Dafa Is So Marvelous"”