(Clearwisdom.net June 13, 2003) At 10 am US central time on June 12, 2003, a court hearing concluded at the US Federal District Court in the Northern District of Illinois. The court accepted a brief of Amicus Curiae signed by several dozen members of the U.S. Congress on June 11 requesting the court to proceed with the lawsuit against Jiang Zemin.

On October 22, 2002, the first day Jiang Zemin arrived in the United States, representatives of Falun Gong practitioners handed a subpoena formally issued by the U.S. District Court Northern District of Illinois to the Chinese and American guards who were in charge of the safety of Jiang Zemin at the Chicago Ritz Carlton Hotel. The above photo was taken on October 22, 2002, when the court issued the subpoena and Falun Gong practitioners were holding an appeal outside the Chicago Ritz Carlton Hotel. 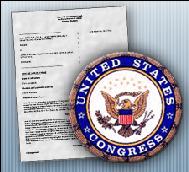 A number of members of the U.S. Congress as Amici Curiae submitted a brief to the District Court in Illinois urging the court to proceed with the lawsuit against the former Chinese leader, Jiang Zemin for among others, genocide, and crimes against humanity.

The lawsuit against Jiang is accepted and heard at the Northern District Court of Illinois.

The brief was authored by Congressman Tom Lantos (D-CA), the ranking Democrat on the House Foreign Relations Committee. The brief opens as follows, "Amici Curiae are a number of members of Congress who have a long-standing interest in foreign affairs and are concerned about human rights and human rights conditions in the People's Republic of China."

The Congressional brief disclosed that the Department of Justice asserts that in the case at bar, representatives of Mr. Jiang threatened to disrupt the planned meeting with President Bush at Crawford, Texas, if the State Department did not protect Mr. Jiang's delegation from service of process relating to the case at bar. On October 22, last year when Jiang Zemin visited the United States, he first arrived at Chicago and the subpoena issued by the District Court was sent to Jiang's hotel the same day.

The amicus brief urged that the court not dismiss this case at this time but should proceed to the merits of the case at bar. The brief pointed out, "It is of course clearly in the interest of Government of the People's Republic of China to threaten retaliation against the United States as a means of ensuring that they do not need to defend themselves in the U.S. court against allegation of human rights abuses and atrocities."

The amicus brief stated, "No less important a consideration to share with China is the fact that human rights concerns have long been considered a key aspect of U.S. foreign policy, and that this lawsuit was filed not to embarrass China, but to persuade the defendants to end their persecution of Falun Gong and respect the rights of all persons in China. In fact, this lawsuit should be supported by the U.S. Department of State insofar as it is highly consistent with the goals set forth in their annual review of human rights around the world."

The brief emphasized, "Mr. Jiang rose to power for his hard-line approach to crushing the democracy movement of 1989. Throughout his rule -- one that the U.S. State Department itself calls an 'authoritarian rule' -- reputable sources such as Amnesty International, Human Rights Watch and the State Department's own Country Report on Human Rights have documented severe and systematic human rights abuses by Jiang's government against his own people."

The lawsuit filed in the U.S. District Court Northern District of Illinois against Jiang Zemin: Plaintiffs: A, B, C, D, E, F, and others similarly situated, Wei Ye, and Hao Wang. Defendants: Jiang Zemin and Falun Gong Control Office (A.K.A. Office 6/10). Civil Action No. 02 C 7530. On April 14, the plaintiffs' attorney submitted to the court documents citing evidence of crimes committed by Jiang Zemin and "610 Office" and other documents required by the legal procedure.

“Washington DC Press Conference: 38 Members of US Congress Co-Sign a Brief in Three Days to Urge the Court to Proceed with the Lawsuit Against Jiang (Photos)”