Switzerland: Practitioners Commemorate the Fourth Anniversary of April 25 Appeal in Front of the Chinese Consulate in Zurich (Photos)

(Clearwisdom.net) On April 25, 2003, Falun Gong practitioners from the district where German is spoken in Switzerland held a peaceful sit-in appeal in front of the Chinese Consulate in Zurich to commemorate Dafa practitioners' grand appeal on April 25 in 1999 at the Appeal Office of the Chinese State Department near the Zhongnanhai Compound. Four years ago, the peaceful appeal by 10,000 Falun Gong practitioners occurred when the Jiang regime began to slander Falun Gong. The regime later used the incident as an excuse to start its brutal persecution of Falun Gong. 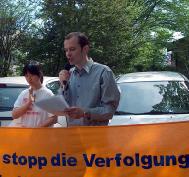 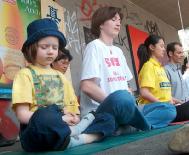 On the same day, practitioners in Geneva, Switzerland concluded their activities on the last day of the meeting of the United Nations Commission on Human Rights. Starting from 2 pm, practitioners held group exercises, sent forth righteous thoughts in front of the delegations and held activities to commemorate the fourth anniversary of the 4.25 appeal.

“Bring Jiang to Justice, End These Atrocities Against Humanity”

“Canada: Practitioners Rally in Montreal's Chinatown to Commemorate the Fourth Anniversary of the Zhongnanhai Appeal (Photos)”