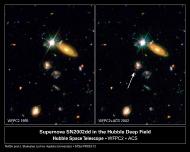 [Left] - A Hubble Space Telescope image of a portion of the Hubble Deep Field North as originally photographed in 1995 with the Wide Field Planetary Camera 2.

[Right] - A composite image of the same field as imaged by Hubble's Advanced Camera for Surveys (ACS), combined with the original WFPC2 image. The ACS observations were made in May and June 2002. The red spot is the glow of a very distant supernova captured exploding in the field.

(Clearwisdom.net) According to a press release from Hubble Site on April 10, 2003, astronomers using the NASA Hubble Space Telescope's Advanced Camera for Surveys (ACS) have found two supernovae that exploded so long ago they provide new clues about the accelerating universe and its mysterious "dark energy." The supernovae are approximately 5 and 8 billion light-years from Earth. The farther one exploded so long ago the universe may still have been decelerating under its own gravity.

The physics of the explosions is so similar from star to star that all Type Ia supernovae glow at a predictable peak brightness. This makes them reliable objects for calibrating vast intergalactic distances.

According to report from Space.com, theorists have known since the 1920s that the universe was expanding. They wondered if that expansion would go on forever, or if common gravity might eventually win out and pull everything back together in a sort of Big Crunch.

Then in 1998 two separate groups hunting faraway supernovae found several that were dimmer than they should have been, indicating that the universe is not just expanding, but accelerating.

According to the news release from Hubble site on April 10, in 2001 Hubble astronomers found a supernova even farther away. It offered the first evidence the expanding universe was once decelerating.

Information from studies of Type Ia supernovae confronted astronomers about five years ago with the stunning, unexpected revelation that galaxies appeared to be moving away from each other at an ever-increasing speed. They've attributed this accelerating expansion to a mysterious factor known as dark energy that is believed to permeate the universe.

Scientists believe that the sharper images, wider viewing area, and keener sensitivity of ACS should allow astronomers to discover more about supernovae, which they believe will allow them to uncover the full history of the universal expansion.