(Clearwisdom.net) From noon to 2 p.m. on March 7, 2003, approximately 500 Falun Gong practitioners from different states gathered in Washington DC and held a rally in front of the State Department. They appeal to the Department of State to urge the Chinese government to immediately release Dr. Charles Li, a US citizen and a Falun Gong practitioner, who is at present wrongfully imprisoned in China. Around 2 p.m., Deputy Assistant Secretary of State, Mr. Scott Carpenter, came to the rally and received a petition letter and more than 20,000 signatures calling for the Chinese government to immediately free Charles Li. 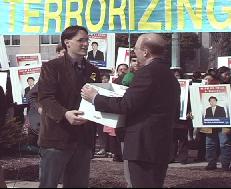 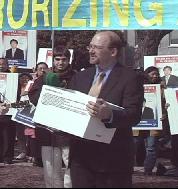 Representatives from different NGOs, government officials, personnel from the Bar, representatives of student organizations and Charles's friends and relatives were invited to give speeches. A unique set of art performances was also arranged during the rally. Using the form of drama, poetry and song, the performances illustrated the plight of an American citizen who has been unlawfully detained by the Chinese government as well as the American public's concern, attention and thought on this incident.

Some world organizations that attended the rally condemned the Chinese government for holding this American citizen as hostage to play diplomatic games.

Charles Li has been living in the US for many years to study and work. On January 22, 2003, he went back to China to visit his family. After stepping off the airplane at Guangzhou Airport, he was arrested by Chinese police officers; that was 47 days ago. On January 24, the Chinese government transferred Charles Li to the Yangzhou Detention center in Jiangsu Province, where he is currently imprisoned.

During the rally, Mr. Mark Palmer, Vice Chairman of Freedom House, Mr. William Saunders, Human Rights Counsel of the Family Research Council and Legislative Assistant of Congressman Tom Lantos, Ms. Faith McDonnell, Director of Religious Liberty Program of The Institute on Religion and Democracy, and Mr. Morton Sklar, Executive Director of World Organization Against Torture USA and representatives from other organizations delivered speeches. They expressed their opinions towards the arrest of Dr. Charles Li and their opposition and indignation towards the Chinese government's open violation of the International Law and its trampling basic human rights of other country's citizen.

Mr. Pat Stuart, the spokesperson of Consul Affair Bureau from the US Department of State said in an interview on March 7, "We are paying very careful attention to the case of Mr. Charles Li, because he is still imprisoned."

Congressman Charles Gonzalez of Texas said in his letter to the Washington DC rally, "We should recognize Falun Gong followers' rights to freedom of speech and religion. The history of our own country demonstrates that the greatest strength of a nation comes from allowing its citizens such basic freedoms. China should recognize this essential tenet of responsible government and stop its persecution of Falun Gong practitioners."

Congressman Wm. Lacy Clay also sent a letter to the rally organizer to express his support and called to end the persecution of Falun Gong practitioners in China as well as in different places around the world.

On the evening of March 7, 2003, a candlelight vigil was held around the Washington DC monument to mourn for the 589 Falun Gong practitioners who were tortured to death.