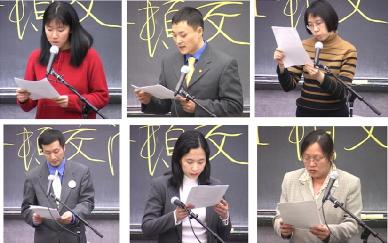 Twenty-some practitioners shared their experiences in clarifying truth to governments, media and China.

At the conference, practitioners shared their understandings from different angles on topics such as rescuing family members, reducing persecution, denying the arrangement of old forces, comprehensively clarifying the truth and saving sentient beings. Through clarifying the truth to government and media, telephone calls to China, and the rescue family members car tour, practitioners walk to all corners of the world to expose Jiang regime's brutal persecution of Falun Gong.

Practitioners at the conference increased their understanding of the fact that Dafa practitioners are one body. Every rescue of a practitioner is a big shock to the evil force. The large-scale rescue effort has just begun. Our goal is to let each practitioner detained walk out of jails with dignity and join the Fa rectification process. The Dafa whole body is indestructible.