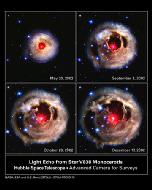 (Clearwisdom.net) On March 26, 2003, NASA published a group of images captured by Hubble Space Telescope. The images captured on May 20, September 2, October 28, and December 17, 2002, respectively showed the star named V838 Monocerotis or V838 Mon for short, grew hotter and swelled during a short period of time.

In January 2002, a dull star in an obscure constellation suddenly became 600,000 times more luminous than our Sun, temporarily making it the brightest star in our Milky Way galaxy. This mysterious star, V838 Mon, has long since faded back to obscurity. But observations by NASA's Hubble Space Telescope of a phenomenon called a "light echo" around the star have uncovered remarkable new features. These details promise to provide astronomers with a CAT-scan-like probe of the three-dimensional structure of shells of dust surrounding an aging star.

NASA's Hubble Space Telescope watched the dust shell around V838 Mon over many months after the outburst. Every time Hubble astronomers take a picture, the dust ring looks larger than before. But, in the Hubble pictures, the dust really isn't growing. Instead, light from the flash is sweeping through the dust, lighting up different parts. This illusion is called a "light echo."

The outburst of V838 Mon was somewhat similar to that of a nova, a more common stellar outburst. A typical nova is a normal star that dumps hydrogen onto a compact white-dwarf companion star.

By contrast, however, V838 Mon did not expel its outer layers. Instead, it grew enormously in size, with its surface temperature dropping to temperatures not much hotter than a light bulb. This behavior of ballooning to an immense size, but not losing its outer layers, is very unusual and completely unlike an ordinary nova explosion.

"We are having a hard time understanding this outburst, which has shown a behavior that is not predicted by present theories of nova outbursts," said the lead observer, astronomer Howard Bond of the Space Telescope Science Institute in Baltimore. "It may represent a rare combination of stellar properties that we have not seen before."