(Clearwisdom.net) Amnesty International, Carnegie Mellon University Chapter and University of Pittsburgh Chapter, hosted a Human Rights Protection Event in McConomy Auditorium on Carnegie Mellon University campus from 7pm to 9pm, March 10, 2003. The theme of the event was "Persecution in China Hits Close to Home" and "She could not be silent," calling for help rescuing Dr. Cailu Xu's wife, Xiaomei Jia, who has been imprisoned for over a year in Beijing Forced Labor Camp for practicing Falun Gong and distributing Falun Gong flyers. 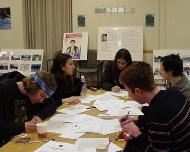 Dr. Cailu Xu has been an associative professor in the Department of Mechanism in Tsinghua University in China. His wife, Ms. Xiaomei Jia, an engineer, had been illegally arrested three times in the year of 2000 and her workplace suspended her from her job. In November 2001, Xiaomei was once again abducted and sent to a forced labor camp. Since then, Dr. Xu and their 13-year-old son have not gotten a chance to see Xiaomei. The only news they heard was that Xiaomei has been suffering various kinds of mental tortures simply because she would not abandon her practice of Falun Gong.

About 50 people attended the event. Two reporters, one from WTAE TV (ABC local news) and another from WPXI 11 News (NBC local news), came to the event and interviewed Dr. Cailu Xu.

Hongming Jin, a software engineer at Pittsburgh, introduced the persecution of Falun Gong in China, including the case of Dr. Charles Li. Then, Dr. Cailu Xu, a research associate at the University of Pittsburgh, spoke about his wife's ordeal and their family tragedy after the persecution.

Students and local residents are very concerned about the safety of Xiaomei Jia and Charles Li. They signed their names on the petition forms in front of the auditorium. During the reception period, many students stayed and started to write letters to their local congressmen/women, expressing their concerns for Dr. Cailu Xu's wife, urging their congressmen/women to rescue her. Copies of their letters will be sent to the Chinese Premier, the Chinese Embassy in the US and the Beijing Female Forced Labor Camp where Xiaomei is being held.

Both ABC and NBC local news broadcast reports on the event and their interviews with Dr. Cailu Xu on the Evening News between 11:00pm and 11:30pm.