At the press conference, three Australian citizens talked about the ordeal that their family members have endured in China. Mr. Yan said that his sister Ms. Yan Haiyu has been imprisoned for more than three years, and has been suffering cruel torture simply because she practices Falun Gong and believes in "Truthfulness-Compassion-Forbearance". Mr. Li said that his fiancée was illegally sentenced to two years of forced labor and jailed in the Shanghai Qingsong Women's Labor Camp because she distributed VCDs about the real story of Falun Gong. Mr. Lu said that because his wife practices Falun Gong, when she took their 6-year-old daughter back to China to visit her family there, she was followed by police officers. On January 22, she was illegally arrested. Later, because this incident was exposed to the media and public, the Australian Embassy in China got involved in the issue, and his wife was released.

A Queensland Falun Gong spokesperson also delivered a speech. He called upon the Australian government and people as well as people all over the world to work together to uphold justice and help stop this persecution of innocent and kind people.

Government officials who attended the press conference expressed their deep sympathy towards the persecuted Falun Gong practitioners. They also encouraged practitioners in Australia to persist in their belief in Truthfulness-Compassion-Forbearance and continue to work hard to allow more people learn the facts about the persecution going on in China.

Member of Parliament Mr. Thompson said, "In Australia, Truthfulness-Compassion-Forbearance is a noble and lofty belief and should be recognized by everyone. Your actively introducing these principles is highly welcomed in Australia and the entire world should welcome you to do so. The Australian people are astonished to learn that Chinese people are imprisoned and tortured because they believe in and spread these principles."

City Council member Mr. Bailey expressed his deep sympathy towards those Falun Gong practitioners in Australia who have family members in China enduring the brutal persecution. He said, "My heart is filled with sympathy for Australian Falun Gong practitioners' family members and all practitioners who are imprisoned, murdered and persecuted in China. The Chinese government does not accept the principles of Truthfulness-Compassion-Forbearance, instead, it rejects and persecutes the people who follow these principles. It is really a pity!" 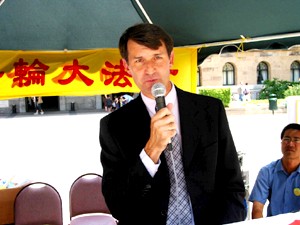