On January 14, 2003, Falun Dafa Introductory Workshop was held in the Rotary International, Malaysia (a charity organization). Former president of the club, Mr. Lim introduced Mr. Yan Wenshun from Kuala Lumpur who is a retired lieutenant commander. Over ten years ago when serving in the navy, Mr. Yan had started practicing qigong. In those ten years, he had tried multiple qigong practices, but his health condition had been worsening. Not until about four years ago did he find Falun Dafa, and his health condition rapidly improved.

Mr. Yan looks so healthy and young that no one can believe that he has been over 60 years old. 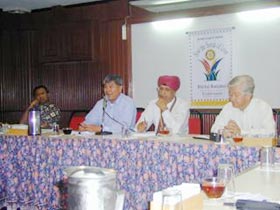 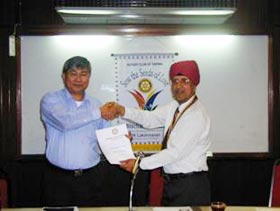 's cultivation principle -- to assimilate to the principle of the universe, "Truthfulness-Compassion-Forbearance."

In the question and answer session, many audience members asked about the incidents in China. Mr. Yan said, "The suppression in China is originated from Jiang regime's jealousy and fear, because the government's survey showed that the number of practitioners of Falun Dafa is between 70 million to 100 million. Mr. Yan said, the Chinese government should not at all be afraid of Falun Dafa, because other than doing the exercises, Falun Dafa practitioners must cultivate "Truthfulness-Compassion-Forbearance" to improve themselves physically, mentally and spiritually.

Before the conclusion of the workshop, Mr. Lim thanked Mr. Yan for introducing Falun Dafa and said to the audience that when we are young, we earn a lot of money, while when we are growing old, we spend the earned money to see doctors. All members in this club felt fortunate to be able to know such a good cultivation practice from Mr. Yan.

After that, Mr. Lim, on behalf of the Rotary International, presented an acknowledgement certificate to Mr. Yan to express their thanks for his introducing a "Powerful Ancient Practice To Improve Body, Mind and Spirit."