Russia: Report on the Healing Effects of Falun Gong from the Moscow Business Committee

Report on the healing effects of Falun Gong

Random sampling was used by the team, in which 12 out of 32 Falun Gong practitioners were selected. The investigation period was from April 23 to June 24 in 2001.

The contents of the examination included:

The physical conditions of the 12 subjects in the investigation were that 3 out of the 12 were under 40 years old, 8 of them were female and 10 of the 12 practitioners had been practicing Falun Gong for more than 2 years.

All the subjects in the investigation had some sort of illness before practicing Falun Gong, among which there existed:

-- 3 with stomach and intestinal problems (ulcer and inflammation);
-- 1 with respiratory tract problems;
-- 8 with relationship problems, such as mental depression and fatigue.

Falun Gong is composed of a set of meditative movements for improving mind, body and spirit. It also involves spiritual cultivation through improving one's moral character and attempting to live by the principles of Truthfulness, Compassion, Tolerance. Practitioners voluntarily participate in Fa study [studying the teachings of Falun Gong founder Mr. Li Hongzhi] and practice the Falun Gong exercises together.

The Oxford Analysis and Test Theory was used by the team to test the practitioners' objective responses to daily questions and to observe how practicing Falun Gong has impacted the way they solved those problems. Among the 12 people, the results of the test were positive for 9 of them.

The clinical medical examination results for the subjects were that the practitioners displayed no signs of illness, normal figures for chemical examination index of blood and urine and no pathological responses after a comprehensive physical examination. All subjects under investigation had normal mental health, being stable in mind, positive and having proper reactive responses. The subjective opinions of the subjects under investigation are as following: Practicing Falun Gong has improved both their mental and physical health.

The conclusion of the examination by the Investigation and Study Team:

A statement from the Investigation and Study Team:

"Practicing Falun Gong enables obvious improvements in health and spirit. Falun Gong does not cause any danger or harm to human health or spirit. It is an acceptable health protection method." 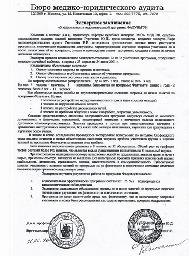