: Falun Dafa, founded by Mr. Li Hongzhi in 1992, consists of meditation, gentle exercises and the guiding principles of Truthfulness, Compassion and Forbearance; and

: Within a short period of about eight years, Falun Dafa became a widely recognized as a practice that promotes better health and a higher moral level; and

: Falun Dafa, transcending cultural and racial boundaries, is practiced in over 40 countries and we believe the civil rights of Falun Dafa should be respected and protected; and

: We commend the practitioners of Falun Dafa for their contributions to our community;

, Mayor of Columbus, Georgia, do hereby proclaim the month of November, 2003 as

, I have hereunto set my hand and caused the Official Seal of Columbus, Georgia to be affixed this 18th day of November, 2003. 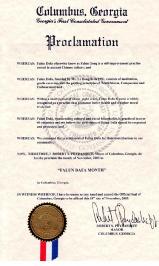