(Clearwisdom.net) To rescue Charles Li and call for an end of brutal persecution of Falun Gong in China, Miss Yeongching Foo spoke at a hearing on hate crimes that California Assembly member Meixin Zhao held. Foo pointed out in her speech that Chinese government's persecution of Falun Gong practitioners in Los Angeles is no different from hate crime.

According to the December 10's report by the World Journal Daily, San Francisco Chinese American Charles Li who supported Falun Gong was arrested at Guangzhou Airport in January 2003 and was sentenced to three years' jail time. To rescue him, his fianc e Yeongching Foo had accepted interviews from over 100 media agencies around US to call for attention of US government. At the hearing presided by California Assemblywoman Meixin Zhao, Foo pointed out in her speech that Chinese government's persecution of Falun Gong practitioners in Los Angeles is nothing short of hate crime. 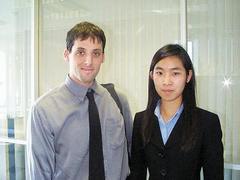 Yeongching said that her fianc Charles Li boarded flight from San Francisco on January 22 and was arrested at Guangzhou Airport even before he went through the custom and was sentenced to three years' jail time because he was enlisted in Chinese government's blacklist. The evidence she had showed that her fianc suffered both mental and physical torture in jail. Chinese government fabricated accusations and threw him in jail in hope of forcing him to abandon his belief in Falun Gong through brainwashing. This act has no difference from hate crime.

World Journal article said in the end that Yeongchine was accompanied by Leeshai Lemish, a third year Jewish student of Pomona College Chinese History Department. Leeshai Lemish who started practicing Falun Gong two years ago said that he liked Falun Gong's principle of "Truth Compassion Tolerance" and the peacefulness the practice brought him.