(Clearwisdom.net) Montreal -- A Quebec Court of Appeal reinstated Falun Gong practitioners' Motion for Contempt of Court against the Montreal Chinese Newspaper Les Presses Chinoises and the author Bing He. The decision will be recorded in the most prestigious law journal -- Dominion Law Reports. 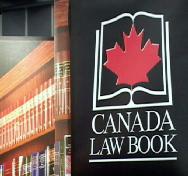 This decision, being included in the Dominion Law Reports, lays an important legal foundation. It creates a precedent for lawyers in other cases. It also establishes the standard and authority for prohibiting newspapers from publishing defamatory and hateful articles while a civil action is pending. The decision by the Quebec Court of Appeal described the character of Falun Gong and its form of cultivation positively. The Court of Appeal determined that the safeguard order to prohibit the newspaper from publishing articles and the subsequent publications defaming Falun Gong practitioners provided sufficient merit for the Motion for Contempt of Court.

This news is obtained at a point in which Falun Gong practitioners' lawsuit against the Chinese newspaper Les Presses Chinoises and author Bing He for defamation and incitement of hatred against Falun Gong has entered the final period of trial (November 10-25, 2003).

According to individuals in the legal field, the Dominion Law Reports has a history of more than one hundred years. Few decisions of the Quebec Court have been included in this journal. The recording of this decision indicates its significance.

The reviewing committee of the Dominion Law Reports considers thousands of new decisions every week from different provinces and selects significant and representative cases for its journal. About one percent of cases are included, so that those in the legal field, including judges, lawyers, law professors and students, can learn from and adopt the decisions of these cases.