Whereas, Many Texans are gathering in Houston on October 12, 2003, for a conference and related activities on the topic of Falun Dafa; and

, Introduced in the United States by Li Hongzhi in 1992, Falun Dafa, also known as Falun Gong, is a traditional Chinese system of self-refinement of mind and body; its goals include improved health, a purified mind, an uplifted sprit, and a deeper understanding of life and humanity, which ultimately leads to a more meaningful life; and

, Bridging Eastern and Western cultures, Falun Dafa is based on the universal principle of zhen, shan, and ren, meaning truthfulness, compassion, and forbearance; its 100 million-plus practitioners hail from more than 60 countries and include countless Texans; and

, During the past four years, the regime of Communist leader Jiang Zemin has launched a campaign of terror against practitioners of Falun Dafa in China; hundreds of individuals have been tortured and killed, and thousands have been jailed and imprisoned in labor camps and mental hospitals, while women, particularly, have been victims of sexual violence, including forced abortion; Jiang Zemin has been sued for torture, genocide, and crimes against humanity in the United States and other countries; and

, Falun Dafa practitioners have demonstrated great compassion and tolerance in the face of this brutal persecution; their nonviolent behavior has served as an inspiration for all people involved in the worldwide movement for freedom and human rights; now, therefore, be it

, That October 12, 2003, be recognized as Li Hongzhi Day and Falun Dafa Day in Texas and that all those affiliated with the Houston conference be extended heartfelt best wishes for a memorable and meaningful event. 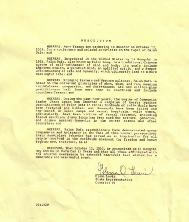 “Mayor Hollingsworth of Ruston, Louisiana: "Although the Persecution Is Still Going On, Please Know That I Believe That 'Truthfulness, Compassion, and Tolerance' Will Prevail in the End"”