Your letter of the 23rd of July last drew my attention to Falun Gong, a traditional Chinese qigong freely practiced by 100 million people worldwide.

Unfortunately, it is not the same story in China. The practitioners of this particular practice are tortured and killed, total abject suppression as you fairly stated in your letter.

I would be willing to intervene, on your behalf, to the French Government via Monsieur Dominique de Villepin, Minister of Foreign Affairs, to defend the basic human rights by condemning the Chinese government's attitude in this matter.

Hoping that these multiple steps taken on the European as well as the International front will come to fruition one day. Rest assured of my deepest good wishes. 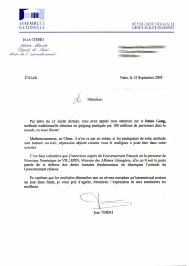 “A Policeman is Transformed by the Truth”

“Russia: Many People Learn about Falun Dafa at a Successful Photo Exhibition (Photos)”