(Clearwisdom.net) On June 17, 2003, Indiana State Representative Ben GiaQuinta issued a proclamation in recognition of Falun Dafa as a Distinguished Hoosier Practice. Hoosier is a nickname of the State of Indiana.

Be It Hereby Known And Proclaimed

Whereas, The month of May in the year of 2003 marks the completion of the 11th year that Falun Dafa has been publicly practiced in the United States; and

, During these 11 years Falun Dafa has expanded its practice to include over 100 million people in 60 countries; and

, The growth on the part of Falun Dafa has been due in large measure to the spirit of inclusion which the practice embodies; and

Whereas, Falun Dafa practitioners believe in the power of truthfulness, compassion, and forbearance so that an open heart, open mind, and inner peace may be achieved; and

Thus, as a member of the One Hundred Thirteenth Indiana General Assembly, I am pleased to Recognize 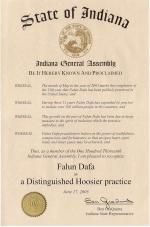 “Proclamation in Recognition of Falun Dafa Month in the State of Indiana, Indiana House of Representatives [May 30, 2003]”