From January 6 to January 8, 2003, our group introduced Falun Dafa in the five Peruvian towns of Chilca, Cante, Chincha, Pisco and Ica. An 11-year-old practitioner also participated in this activity, along with his mother. During these three days, we witnessed people's earnest longing for Dafa. How magnificent and glorious is our opportunity to offer salvation to people, endowed by Master!

Chilca is a small town in southern Peru. We separated into groups and distributed flyers to people in the street. We also offered free exercise instruction in the central square. The young practitioner put flyers in every door, afraid of missing even a single predestined person. Seeing people in the street with Dafa flyers in their hands, we were sincerely happy for them. After we finished teaching Dafa exercises in the central square, we went directly to our second stop -- Cante.

Promoting the Fa at a Senior Citizens' Club

Two years ago, Dafa practitioners walked through Cante. We walked through the streets and blocks and distributed flyers. Our exercise demonstration in the central square attracted many people. After we finished, some asked about Falun Gong, some praised the exercise for its elegance. One lady with a Dafa flyer in her hand said she wanted to study Falun Gong and she suggested that we teach Dafa in a Seniors club. We immediately went to the Seniors club. The elderly people at the club were very happy to see us and paid close attention as a Western practitioner introduced Falun Dafa. They learned all the exercises from Dafa practitioners. Before we left we gave the club several Falun Gong books written in Spanish. The elderly people were very thankful and "fought" to read the books. The lady who asked us to come told us about the "coincidence," saying "I never stop at the park. This morning, I don't know why I sat there. Later when I saw you wearing yellow T-shirts, I felt you were doing something very good. When I read your flyer, I liked it very much and I thought elderly people like me need Truth, Compassion, Tolerance, so I asked you to come." A 97-year-old man also learned Falun Gong. We were happy, for he will obtain a bright future.

Interview at a Private Broadcast Station in Chincha

Chincha was the first place Dafa practitioners were interviewed by local broadcast station(s) during the walk two years ago. After that, Dafa practitioners came here many times to promote the Fa. It was dusk when we arrived this time. Many people sat on chairs in the central square. We didn't look for a hotel and distributed flyers to everyone. In the evening we held a small celebration party for a Western practitioner's birthday. She said, "I have never spent a birthday away from home. Today is really meaningful to me."

The next morning we distributed flyers to people in the park, in shops on both sides of the street, to people at their homes, and to people walking in the street. After reading the flyer, one passer-by told us that his older brother works at the HT broadcast station and he hoped we could get there before noon and tell his brother about Falun Gong. At 12 noon we arrived at the station and talked to Mr. Juan, the brother of the passer-by. After listening to our introduction, Mr. Juan invited us into the live broadcast studio and began interviewing us. He continuously asked questions and the Western practitioner told him about the tremendous changes that took place for her after she obtained the Fa. She used vivid examples to validate the boundless happiness Dafa brought to people. After a half-hour interview, Mr. Juan the owner said that he would introduce Falun Dafa to his family and friends. Before we left, we gave him copies of Dafa books.

"Predestined Relationships" in Pisco and Ica 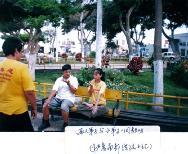 We arrived at Pisco during the afternoon of the 7th and distributed flyers in the central square and nearby streets and shopping centers. Right after we had handed out all flyers, a young man asked us for one. He said he worked at a nearby Chinese restaurant. He liked the flyer very much and immediately asked to learn Falun Gong. The Western practitioner and young practitioner taught him right away. At this time another young man came, who said he was the first young man's brother and he also wanted to learn Falun Gong. However, his restaurant was open for business and he would come later to learn. We told him we would wait for him. After learning Falun Gong, they were very happy and repeatedly invited us to eat free at his restaurant. We thanked them for their kindness. They brought cold spring water to express their gratitude. They treated us like long lost family and they left reluctantly when we had to leave.

One man held a flyer and told us his name was Luma and that he lived in Ica. He hoped we could go to his home to teach his family about Falun Gong. At dusk, we drove our car toward the central park in Ica, which was filled with people. We continuously distributed flyers and didn't want to miss a single, predestined person.

In the evening, we went to Mr. Luma's home and saw dozens of his neighbors standing in front of his home. The Western practitioner introduced Falun Gong to all people and demonstrated the five sets of exercises. Luma and his neighbors learned the exercises together. After we finished teaching, Mr. Luma told us excitedly that he truly felt the wonderfulness of this practice. His sister held a tape recorder; she listened to the exercise music and didn't want to leave. Before we left, we gave them several Dafa books in Spanish. His family and neighbors thanked us repeatedly for bringing such a wonderful exercise to them. In our hearts, Dafa practitioners know that our benevolent Master gave these people this rare opportunity that doesn't come in thousands of years.